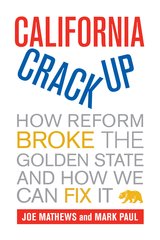 Mark Paul, one of the authors of California Crackup, addresses the state budget and the low, low bar for success in his recent blog post, “Defining Failure Down.”

Paul writes: “One of the consequences of having the least functional governing system in the world is that the bar for determining what constitutes success gets set very low. Even the most ordinary and trivial things in California get counted as a victory.

David Deamer Explores Life's Origins at Google
What if There Were Nutrition Labels For Drugs?

What’s it all about, Arnie?

The End of the Line for California