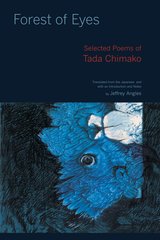 Jeffrey Angles has been chosen by the translator Charles Martin as the recipient of the 2011 Harold Morton Landon Translation Award from the The Academy of American Poets. Angles is being recognized for his translation of Tada Chimako’s Forest of Eyes. The Harold Morton Landon Translation Award is given to the best book of poetry translated from any language into English published in the previous year, and carries a prize of $1,000.

On selecting this volume for the award, Martin wrote:

“Jeffrey Angles’s skillful new translation, Forest of Eyes: Selected Poems of Tada Chimako, brings into English for the first time a generous selection from the work of this important twentieth-century Japanese poet. New readers of Tada will discover in her verse a poet both erudite and passionate, a master of traditional Japanese forms and, at the same time, a cosmopolitan modernist as taken by the construction of invisible cities as Calvino, and as drawn to the exploration of forking paths as Borges.”

Jeffrey Angles is an associate professor of Japanese and translation at Western Michigan University. He is the author of the monograph Writing the Love of Boys: Origins of Bishonen Culture in Japanese Modernist Literature (University of Minnesota Press, 2011) about representations of same-sex love in early twentieth-century Japanese poetry and prose. Angles is also a prominent English translator of contemporary Japanese poetry. His translations include the books Soul Dance: Poems of Takako Arai (Mi’Te Press, 2009), Killing Kanoko: Selected Poems of Ito Hiromi (Action Books, 2009), Forest of Eyes: Selected Poems of Tada Chimako (University of California Press, 2010), and Intimate Worlds Enclosed by Takahashi Mutsuo (Kawamura Memorial Museum, 2010).

Tada Chimako was born in 1930 and spent most of her youth in Tokyo before moving to Kobe, a remote port town in Western Japan. During her lifetime, she gained prominence as a poet, scholar, and as a translator of French poetry. Tada is the author of over fifteen collections of poems, including Hanabi (Fireworks) and Yusei no hito: Tada Chimako kashu (Person of the Playful Star: Tanka of Tada Chimako). Tada’s work is widely considered an essential contribution to postwar Japanese poetry and also explores themes such as the psychology of women, cultural theory, European history, mythology, and classical literature. She taught French literature and religious studies at Eichi University in Japan up until two years before her death in 2003.

Charles Martin‘s latest book of poems is Signs & Wonders (Johns Hopkins University Press, 2011). His last book, Starting from Sleep: New and Selected Poems (Overlook, 2002), was a finalist for the Lenore Marshall Award of the Academy of American Poets. His verse translation of the Metamorphoses of Ovid received the Harold Morton Landon Award from the Academy of American Poets. He’s also the recipient of an Award for Literature from the American Academy of Arts and Letters.

The Academy of American Poets is a 501(c)(3) nonprofit organization founded in 1934 to foster appreciation for contemporary poetry and to support American poets at all stages of their careers. For over three generations, the Academy has connected millions of people to great poetry through programs such as National Poetry Month, the largest literary celebration in the world; Poets.org, the most popular site about poetry on the web; American Poet, a biannual literary journal; and our annual series of poetry readings and special events. The Academy also awards prizes to accomplished poets at all stages of their careers—from hundreds of student prizes at colleges nationwide to the Wallace Stevens Award for lifetime achievement in the art of poetry. For more information, visit www.poets.org.

Center for the Art of Translation Hosts Fanny Howe in San Francisco
Do You Agree With the Guardian's 100 Greatest Non-Fiction Books?

Forest of Eyes Wins Prize for the Translation of Japanese Literature

Who Is Dora Bruder? The Story Behind Patrick Modiano’s Novella