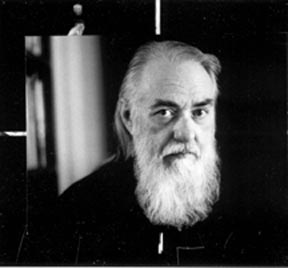 Keith Waldrop was featured on the PBS Online NewsHour’s Art Beat blog this week. As part of Art Beat’s Weekly Poems series, Waldrop reads “Soft Hail” and “Plurality of Worlds”, both from his book Transcendental Studies, which won the 2009 National Book Award in Poetry.

The National Book Foundation said of Waldrop: “If transcendental immanence were possible, it would be because Keith Waldrop had invented it; he’s the only one who could—and in Transcendental Studies he has. These three linked series achieve a fusion arcing from the Romantic to the Postmodern that demonstrates language’s capacity to go to extremes—and to haul daily lived experience right along with it: life imitates language, and when language becomes these poems, life itself gets more various, more volatile, more vital”.

Excerpt from “Shipwreck in Haven”, from Keith Waldrop’s Transcendental Studies:

I can’t swim at all, and it is dangerous to converse with an unaccustomed Element.
ERASMUS

Balancing. Austere. Life-
less. I have tried to keep
context from claiming you.

Without doors. And there are
windows. How far, how
far into the desert have we come?

Rude instruments, product
of my garden. Might also be
different, what I am thinking of.

So you see: it is
not  symmetrical, dark
red out of the snow.

Enemies for therapy, the
rind of the lime tree
in elaborate garlands.

Strew the tatble. Let the hall
be garlanded and lit, the will
to break away. Welcome your couches.

Disquieting thought, I am not
ultimate, full moon, memory.
Prepare for rout.

Here, even, in the
sand. Among the rocks, I have
heard, remnant of a cloud.

Unfleshed, short, thin, pointed.
Independent of you, a
revelation. A great city.

Flatly unknown, you do not
know of yourself, do not know
yourself, not stuck full of nails.

Under such illumination, darkness
becomes terror. Under this high
wall, dark ground.

The gods and you come later, a wealth
of approaches. Within the portico:
marble. Bundled like qualities.

Not—the world—one of
several, as if it could be
different. Nothing. Nothing different.

I mean translated, though some
charms are predetermined. Shall I
not delve and deliver?

If I could think it. Our
wings are broken. As easily might
plunge. In a violent sweat.

The desert. And might be
the same: lemurs
swim down gutters.

And might be the threshold, never
hesitate, ship on the high sea.
The desert in the house.

An opening for possible
storms, as a deity enters
the world, a stranger.

The bed we are not in: can-
not surprise it. What passes
in the street? Pure picture.

In the world these
limits, almost occult—only signals
corporeal. To think of something.

I was hardly dead, when you
called. Now are you convinced?
Infinitely soft strum.

As if night. As if im-
perceptibly. Slowly, you fall. Break
somewhat the blackness of the day.

Might also be any
direction, every start
takes us to another time.

Forth across the sands. From
sky or from the liver,
divined. Endless beginning.

Need not end. Indeed, nothing.  Step
out. Grist for wits. Shadow of your
shell. Stand there.

No other ground. No
other. And the world concerns you every-
where, but do not identify with it.

Let light onto us. Flowers through the
gate, flowers skimming
the wall. A carpet of petal.

Treasures below the earth. Neither in
this world nor another, guarding.
Nothing but fade and flourish.

Now there is a door and whoever
very beautiful and very
very strange. Near you a table.

Laughing. Singing. Calling to one
another, the crack of whips. Cloud to
cloud in ricochet.

Music of hooves and wheels. The heavenly
Jerusalem from shards of Babylon
destroyed. Now a door.

Where thinking ends, house and temple
echo, possible objects of
admiration. Will you go?

Oh yes and wheels on the pavement,
angels of incidence, rebounding from
waves, but precisely. Reflective angels.

Like the hand of a clock which. minute
by minute, crosses its appointed
spaces. Oh! You are passing!

Things are ready. All
things, because something
must be settled. Slung.

Answering laughter. Mixture of
diamond and diamond
and blood, a rope of flowers.

Darwin and the Story of Life
Richard O. Moore at Lunch Poems, December 3