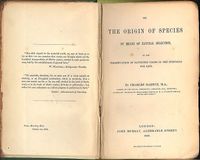 On November 24, 1859, John Murray published Charles Darwin’s “On the Origin of Species by Means of Natural Selection, or the Preservation of Favoured Races in the Struggle for Life”. That same day, the first printing of 1,250 copies sold out, and it is still in print 150 years later. In the book Darwin proposed his theory of evolution, with natural selection as the mechanism. It was one of the most influential books of the past 200 years, marking a dramatic shift in science, and a new view of life on earth.

Evolution is rooted in science, but is also the story of the connection shared by all life forms, going back to the first elements of the universe, says Scott Sampson, author of Dinosaur Odyssey. He finds that this story is at the heart of Darwin’s work, and is essential for a sustainable future. “Arguably Darwin’s greatest contribution was revealing the Great Story, offering up an astounding, evidence-based origin myth that encompasses not only all human cultures, but all life on Earth”, he says. On his blog, The Whirlpool of Life, he argues for a new worldview—one that tells this story of our deep immersion in nature and inspires a sense of wonder about life. 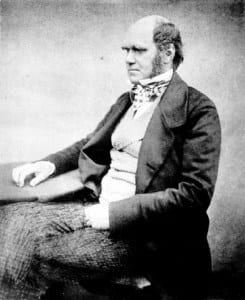 In Darwin’s Universe, Richard Milner notes that On the Origin of Species was exciting for its scientific significance, but also for the dramatic story it told: “Through Darwin’s eyes we no longer see just a sparrow or a cactus, but a roiling drama of conflict and competition, a dynamic landscape of organic beings caught in a relentless struggle for existence.”

The theme of origins is central to both science and spirituality, and since Darwin’s time, there has been controversy about evolution and creationism as ways of understanding life on earth. In their book More than Darwin, Randy Moore and Mark Decker explore the evolution vs. creationism controversy with portraits of all the major figures on both sides.

On the Origin of Species challenged the existing paradigm, and marked the beginning of a new era in science. Over the past 150 years, the theory of evolution has changed, as Peter Bowler chronicles in the 25th anniversary edition of Evolution: The History of an Idea. It will continue to change as we keep working to unravel the mystery of our origins, and try to trace the story of life back to the beginning.

“There is grandeur in this view of life, with its several powers, having been originally breathed into a few forms or into one; and that, whilst this planet has gone cycling on according to the fixed law of gravity, from so simple a beginning endless forms most beautiful and most wonderful have been, and are being, evolved.”—Charles Darwin, the final paragraph of On the Origin of Species

Darwin and the Evolution of a Theory, an exhibit of rare books by Darwin and his contemporaries, is on display at UC Berkeley’s Bancroft Library, weekdays until December 22.

TAGS: Charles Darwin, evolution, More than Darwin, On the Origin of Species, sesquicentennial, story of life