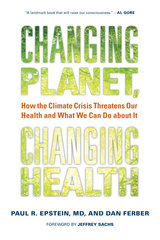 One of our most anticipated titles for Spring, Changing Planet, Changing Health is an eye-opening book that looks at the ways climate change is altering patterns of disease. It’s scary—and pressing—stuff. Before reading this book, I had no idea that since 1976, the planet has given rise to 40 new diseases. Or that every year, one out of every 20 people on the planet contracts malaria. That’s 300 million people, or roughly the population of the United States.

Written by a Paul Epstein, the associate director of Harvard Medical School’s Center for Health and the Global Environment, and Dan Ferber, an award-winning science journalist, Changing Planet, Changing Health presents a different picture of global warming from the one we usually see. For many, it will hit closer to home than scenarios of melting icecaps or rising CO2 levels.

This excerpt from the book, published in Scientific American, tells the harrowing story of a young Kenyan girl infected with malaria, and the ingenious methods her uncle, Andrew Githeko, a world-renowned malaria researcher, devised to combat the disease:

… Without any of the high­tech capabilities grant money would have provided, Githeko was able to use a simple spreadsheet program—and historical temperature and rainfall data for the western Kenya highlands, as well as data from published studies of mosquitoes, malaria parasites, and past epidemics—to develop a mathematical model that correctly predicted past outbreaks in the region, thereby verifying the accuracy of his model.

The model also made a startling new prediction. By the late 1990s, when Githeko did his analysis, the IPCC already had reported that the Earth had warmed 0.6 degrees C (1.1 degrees F) through the 20th century and had predicted that temperatures would continue to rise by at least several degrees more through the 21st. Githeko’s model indicated that a temperature change of just 2 degrees C could trigger malaria epidemics in many once­safe highland regions of East Africa. …

And if you’re in New York, don’t miss Dan Ferber’s talk on April 27 at the New York Public Library. Ferber will discuss his on-the-ground investigations of health threats in Kenya, Honduras, and elsewhere, and present policy solutions that he and Epstein propose to address the global health threats caused by climate change.

Are We Entering an Era of Tornadoes?

Planting the Seeds of Healthy Eating 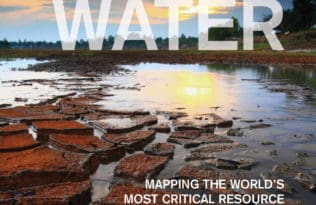 Rex in the City