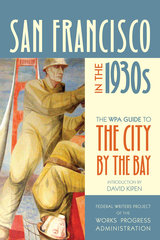 David Kipen served for seven years as book editor and book critic for the San Francisco Chronicle before relocating to L.A., where he started the used bookstore and lending library, Libros Schmibros. Kipen makes his triumphant return to San Francisco this Tuesday night, where he will read from UC Press’s new edition of San Francisco in the 1930s: The WPA Guide to the City by the Bay at the Main Branch of San Francisco’s Public Library.

Kipen writes, “As a wormhole from your seat on the N Judah into the 1930s, the WPA guide to San Francisco is well nigh unimprovable. Like any decent time capsule, San Francisco in the 1930s is really a time machine instead. But every page of this guide doubles as an exhortation to study the Bay around us, and envision the Bay Area of 70 years from now in its place.”

The event begins at 6:30 p.m. in the Library’s Koret Auditorium, and Kipen will be joined by Gray Brechin of California’s Living New Deal Project for a discussion of the book.

Learn more about the San Francisco WPA Guide and its companion edition, Los Angeles in the 1930s: The WPA Guide to the City of Angels, in this review in BeyondChron.