Keith Waldrop’s Transcendental Studies: A Trilogy is the winner of the 2009 National Book Award in Poetry.

“I think that one should take it as one direction that poetry can go, there are not only five books that were selected here, but a dozen others that are very good. I would hope that the existence of this award would get people to read more poetry.”, Waldrop said at last night’s awards ceremony.

Transcendental Studies brings together three related poem sequences—“Shipwreck in Haven,” “Falling in Love through a Description,” and “The Plummet of Vitruvius”—in a virtuosic poetic triptych. A longtime admirer of such artists as the French poet Raymond Queneau and the American painter Robert Motherwell, Waldrop uses collage to give lines new meanings within new contexts. These powerful poems, at once metaphysical and personal, reconcile Waldrop’s romantic tendencies with formal experimentation, uniting poetry and philosophy and revealing him as a transcendentalist for the new millennium. 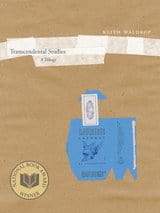 In this National Book Foundation interview, Waldrop discusses the origins of the book, and the techniques he used to create the three poem sequences.

Listen to NPR’s coverage of the National Book Awards, and read a liveblog of the ceremony at Galleycat.

Randall Grahm and Bonny Doon
The Helpful World of Insects