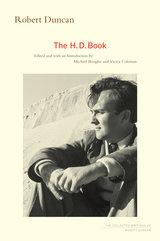 The just-released H.D. Book, Robert Duncan’s homage to the modernist poet H.D. that eventually developed into a unique quest toward a new poetics, is turning heads in literary circles, and not just because of that handsome photo on the cover.

Publishers Weekly, Bookforum, The New Republic, and The Nation have all praised the book for the way it reignites a debate about the task of modern poetics and offers guidance for the modern artist.

TNR‘s Jed Perl believes The H.D. Book may even be “the book that could save American art,” saying it “reads like a clarion call. At a time such as ours, when artists are either embattled or co-opted, either locked away in some ivory tower of their own invention or overtaken by market forces and political forces, Duncan argues for the most strenuous artistic ambitions as a dynamic democratic possibility.”

Bookforum’s Erik Davis writes, “Duncan’s enormous daybook crackles with a timeless and disarming wisdom, but in a timely manner appropriate to our era of samples and networks—an era still unsure about how to read those uncanny figures that animate visionary literature as well as the literature of vision.”

And in a long and thoughtful review of the book in the February 21 issue of The Nation, Ange Mlinko writes, “As a testimony to poetic vocation, it could not be clearer, and in these confusing times a young poet could use the encouragement…”

The publication of The H.D. Book is part of UC Press and the Jess Collins Trust’s publishing project, The Collected Writings of Robert Duncan.

Grhar. Ghhrarrr! The Beast Language of Michael McClure
Do You Love UC Press?