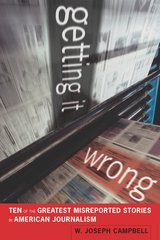 W. Joseph Campbell, author of Getting It Wrong, responds to a review by Dr. Jeannette McVicker in his latest blog post. JHistory, the listserv devoted to issues in journalism history, posted an insightful review by McVicker yesterday, who said Getting it Wrong “should be required reading for journalism students as well as journalists and editors.” While McVicker and Campbell find much common ground in their views on the history of journalism and the prevalence of media-driven myths, they take different positions regarding the power and influence of news media. Below, Campbell responds to McVicker’s principal challenge to Getting it Wrong:

It’s an accurate assessment, especially given that media myths — such as the notion that investigative reporting by the Washington Post brought down Richard Nixon’s corrupt presidency in the Watergate scandal — often seek to “ascribe power, significance, and sometimes great courage to the news media and their practitioners.”

McVicker tends to disagree, writing that “it is surely not the case that the combined effects of such narratives are ‘modest, nuanced, diffused, and situational.’”

She notes as an example “the ongoing legacy of mainstream media’s failure to hold members of the Bush administration accountable during the buildup to the invasion of Iraq, a devastating correlate to Campbell’s spot-on analysis of the distorted, erroneous reporting of what was happening in the streets of New Orleans following Hurricane Katrina.”

For the Last Time, the Washington Post Did Not Bring Down Nixon