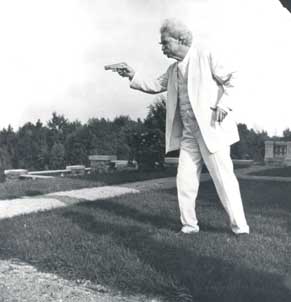 We’re entering the heyday of Mark Twain impersonators, according to the New York Times, and the trend is inspired by the popularity of the Autobiography of Mark Twain, which has been on the Best Sellers list for 13 weeks and counting.

“Long consigned to the dustbin of historical-society meetings and elementary school classrooms,” writes the Times, “Twain impersonators are now selling out shows, entertaining at fancy parties, presenting at conferences, making real money and adding new members to their ranks.”

Editor Harriet Smith, who was interviewed for the piece, sees the phenomenon as a way for those less familiar with Mark Twain to connect with the author. “There are a large number of people who have not read Mark Twain except perhaps Huckleberry Finn or Tom Sawyer,” said Smith. “They get their impression, their idea of Mark Twain, from these impersonators.”

Many impersonators attribute the resurgence of interest in Mark Twain to the famous 100-year embargo he set for the release of his Autobiography. During one of his performances, impersonator McAvoy Layne remarked, “You can’t beat an audience that’s been waiting 100 years.”

The Googlization of Everything Author's Daily Show Appearance
Podcast with Scott Christianson: Seeing Beyond Humane Execution