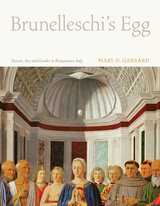 Renaissance art is a much-celebrated subject and its heroes loom large, as the numerous biographies and histories of the ‘masters’ Leonardo da Vinci, Michelangelo, and Titian attest.  Art history textbooks continue to venerate the achievements of the major artists, whose ranks have been only slightly expanded to include a few women, such as Sofonisba Anguissola and Artemisia Gentileschi.  Yet the feminine gender played a much larger creative role in Renaissance imaginations, in the female personification of the entity that artists both depicted and challenged – Nature.

In my new UC Press book, Brunelleschi’s Egg: Nature, Art, and Gender in Renaissance Italy, I examine the competition with Nature that was staged by male Renaissance artists, who loudly proclaimed that their own creative powers were greater than “hers.”  The artists’ challenge to the goddess Natura and her Renaissance avatars, Venus, Diana of Ephesus, and the Virgin Mary, was posed in both word and image, and formed a recognizable subtext in such artworks as Brunelleschi’s Florentine dome, Botticelli’s Primavera, Michelangelo’s Sistine Ceiling, Giorgione’s Tempest, and Cellini’s Perseus Slaying Medusa. From the fresh perspective of art’s competition with nature, these and other familiar monuments of Renaissance art can yield new dimensions of meaning.

In just this period, Nature’s philosophical status was undergoing downward revision; she descended from a divine creative and generative power into a lowly aggregate of rocks, twigs and clouds.  The incipient scientific revolution would demote natura naturans to natura naturata, from active creative agent to the inert product of creation, and it is part of my argument that Renaissance art assisted this transition by visually modeling nature’s demise, in advance of science itself.

What did gender have to do with it?  Everything.  Renaissance male artists variously imagined nature as mother, bride, or mistress, positioning themselves as sons, husbands, and masters; they claimed to revere her, or to have defeated her.  Artists’ competition with nature fed on gender roles in the social world, and would make little sense without that underpinning.  The notion of art as something distinct from and superior to craft was born in this period, and art’s status was elevated in part on the grounds of male artists’ hegemony over an imagined feminine Other.  The idea that art and culture are masculine spheres, which was the dominant view from the Renaissance to the 20th century, depended on the feminizing of nearly everything else.

This book is a history of Italian Renaissance art told from the viewpoint of the allegedly vanquished Other, a counter-narrative that challenges an art history that has tended to repeat the masculinist biases of the period under study.

Mary D. Garrard is Professor Emerita of Art History at American University, Washington, DC, and a specialist in Italian Renaissance art. Her landmark works of feminist scholarship include Artemisia Gentileschi: The Image of the Female Hero in Italian Baroque Art (1989) and Artemisia Gentileschi around 1622: The Shaping and Reshaping of an Artistic Identity (UC Press, 2001). With Norma Broude, she edited Reclaiming Female Agency: Feminist Art History after Postmodernism (UC Press, 2005), the fourth of their influential collaborative texts on feminist art history.

4100 B.C. Was a Good Year for Wine
Radical Light Coming to a Theater Near You