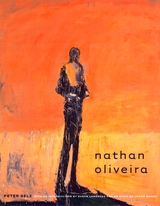 Nathan Oliveira, an acclaimed printmaker, painter, sculptor, and retired Stanford art professor well known for his contributions to the Bay Area Figurative Movement, passed away on November 13 the age of 81, according to an obituary in the Stanford Report. Widely regarded as a key figure in American art, Oliveira’s paintings, monoprints, drawings, watercolors, and sculpture have been exhibited in galleries and museums worldwide, including a major traveling retrospective curated by Peter Selz in 2002.

“I always felt he was a painter of extreme talent and ingenuity, right to the end of his life,” Selz told the Stanford Report, calling Oliveira “the most original figurative painter of his time.” In his authoritative text, Nathan Oliveira, published by UC Press as a companion to the exhibition, Selz explores Oliveira’s beginnings as the son of Portuguese immigrants, his early exposure to Bay Area artists, his formative experience of studying with Max Beckmann, and how he thought of himself as an artist.

Born in Oakland in 1928, the only child of a poor Portuguese immigrant couple, Oliveira went on to earn his bachelor’s degree in fine arts from Mills College and a master’s in fine arts from the California College of the Arts and Crafts in Oakland. He taught painting and printmaking at Stanford from 1964 until his retirement in 1995. He won many awards and honors during his lifetime, including an election to the American Academy of Arts & Sciences and the degree of Commander in the Order of the Infante D. Henrique, given by the President of Portugal.

The Stanford Daily reports that a memorial is being planned for Oliveira the afternoon of January 12, 2011 at
Stanford Memorial Church.