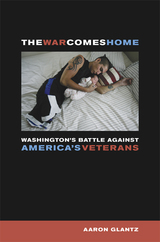 Aaron Glantz, independent journalist and author of The War Comes Home: Washington’s Battle against America’s Veterans, has written a grave, eye opening report on veterans’ inordinately high death rate following service for The New York Times’ Bay Area section. Glantz observes “a surge in the number of Afghanistan and Iraq veterans who have died not just as a result of suicide, but also because of vehicle accidents, motorcycle crashes, drug overdoses or other causes after being discharged from the military.”

After analyzing death records for more than 1,000 California veterans under 35, Glantz found that veterans died at a significantly higher rate than those who had never served in the military, and at a rate “three times higher than the number of California service members who were killed in the Iraq and Afghanistan conflicts over the same period.”

In The War Comes Home, Glantz systematically documents the U.S. government’s neglect of soldiers returning from Iraq and Afghanistan through interviews with more than 100 recent war veterans.

Barbara and Steve Almond Discuss The Monster Within
Adventures with LIFE