BERKELEY, Calif. — September 1, 2010 — Lynne Withey, who has guided University of California Press through some of the most transformative years in its history, will retire from her position as Director at the end of 2010. Withey’s grace under pressure, her unassailable integrity, and her inspired vision for the future—not only for UC Press, but for scholarly publishing in general—have won overwhelming praise from the publishing community.

Withey, who was named UC Press Director in 2002 and served as President of the Association of American University Presses in 2005–06, has brought the combined talents of scholar, leader, and innovator to her work. Under her leadership, UC Press entered the largely uncharted era of digital publishing, weathered economic challenges, and expanded its distinguished publishing program to embrace a number of vital new disciplines. Her commitment to excellence will leave its mark on readers and writers around the world. A national search for her replacement is underway, with plans for a smooth transition at the end of the calendar year.

“Lynne has provided vision and leadership for UC Press and for university presses nationally, articulating strategies for sustaining these essential academic enterprises in an industry that is undergoing fundamental transformation,” says Daniel Greenstein, Vice Provost of Academic Affairs at the University of California. He adds, “Lynne leaves UC Press with a sterling reputation for impeccable quality and an able and creative staff, and in sound financial shape. But of her many accomplishments, she will be remembered within UC as a wonderful colleague, manager, publisher, and friend.”

Peter Wiley, a member of UC Press’s Board of Directors and Chairman of John Wiley & Sons, echoes Greenstein. “Having begun her publishing life as an author, Lynne brought insights to her job that have been essential to a great publishing operation. A consummate professional, she has led the press to repeated successes, managing day-to-day operations with care and thoughtfulness. While focusing on UC Press’s mission, she has helped shape a strategic vision which will serve the press, the university, and our readers well in years to come.”

Withey joined UC Press in 1986 as Assistant Director. She also worked as an acquisitions editor and played a major role in shaping editorial programs—particularly history, music, Middle Eastern studies, and public health. A scholar in her own right, Withey holds an A.B. from Smith College and a Ph.D. from UC Berkeley. She has taught at UC Berkeley, University of Iowa, and Boston University and is the author of four books, including Dearest Friend: A Life of Abigail Adams and Voyages of Discovery: Captain Cook and British Exploration of the Pacific. Prior to joining UC Press, she worked in the office of the Vice President for Academic Affairs in the University of California’s statewide administration.

Withey’s tenure as director fostered a 35% increase in annual book and journal sales (from $19.3 million in 2002 to a high of $26 million in 2008) as well as significant growth of the UC Press Foundation. In 2009 the Foundation successfully completed a $5 million campaign—an unprecedented achievement among peer institutions. Through the leadership of its strong Board of Trustees and generous private donations, the Foundation has enabled UC Press to expand and enrich its publishing program.

Mike McCone, Vice-Chair of the UC Press Foundation and President Emeritus of the California Historical Society, notes, “Lynne inspires trust in people. They know she’s going to do the right thing.” Commenting on Withey’s nimble handling of the economic challenges of the past decade, McCone says, “Panic is not in Lynne’s vocabulary. She stabilized the financial situation at UC Press in a calm, methodical way. I marvel at her dedication, spirit, and talent.”

With approximately 200 new books and 40 journals published annually and 4,000 titles in print, UC Press represents an international cast of authors working both within and outside the academy. About one- fourth are affiliated with the University of California. Author Stephen Humphreys, who currently serves on the UC Press Board of Directors, met Withey when he joined the faculty Editorial Committee in 1991. They collaborated closely on the outstanding Middle Eastern studies list, and she was the editor of his acclaimed book Between Memory and Desire. “Her connoisseurship was superb,” Humphreys says. “In addition to her talent and insight as an editor, I was impressed by her poise, professionalism, honesty, and personal bearing. She was unfailingly courteous, but always frank.”

Colleagues too emphasize the many qualities that Withey has brought to the workplace—both personally and professionally. “Lynne has amazing integrity, ability, and talent. She is very well liked and respected in the scholarly community,” says Rebecca Simon, who as Associate Director and Director of the Journals Division has worked closely with Withey on the development of UC Press’s pioneering digital publishing program. “Lynne is a terrific listener and a great enthusiast,” adds Sheila Levine, Associate Director and Publisher of the Books Division. “She sets an example for us all to aim for the highest standards. When she became director, one of her goals was to make each of the lists we publish among the top three. While she has had to deal with tremendous financial challenges, she has never lost sight of quality.”

Withey’s plans for retirement are almost as ambitious as her career goals. She has increasingly been drawn to the southwest, particularly to New Mexico and Santa Fe, where she maintains a residence. “I want to get back to history,” she says. “My original area was early American history, but I’ve gotten interested in the Spanish period in the American southwest. I’m interested in the archaeology of the place, and in the complicated overlay of cultures.” After decades of devoting most of her time to her career, Withey acknowledges that there will be a period of adjustment while she acclimates to her new life. “I don’t know if I’ll write another book,” she says, “but there’s so much more I want to learn.”

Looking back on her career, Withey sees her biggest challenge as adapting to the enormous and rapid changes that have taken place during the last decade. “Not just in publishing,” she adds, “But in the way that people receive and use information. It’s been revolutionary. We’ve fought to be innovative, played to our strengths, and done important, high-quality work with limited resources.”

Withey says that the thing she’ll miss most once she retires is her professional friendships. “The people whose passions I share, whom I can count on seeing regularly, even though it might be only once or twice a year. And of course I’ll miss my wonderful and talented colleagues here at UC Press.” She will, however, continue to serve on several boards, including that of the UC Press Foundation.

Withey’s decision to retire has been several years in the making. She remained at the helm during the challenges of the recession, and has gradually guided UC Press to its current solid financial footing. She has also played a crucial role in developing a strong staff, one that will be able to launch UC Press into the next era of its history.

“I’ve been director for nine years now. It’s time for new ideas,” she says. “The staff and departments are all very strong, and the management team is extremely talented. It’s inspiring to see tremendous energy, intelligence, and creativity come to fruition at UC Press.”

Founded in 1893, University of California Press (www.ucpress.edu) is one of the largest and most distinguished scholarly publishers in the nation. Among peer university presses of its size, UC Press is the only one in the West and the only one associated with a public university. UC Press’s mission is to advance scholarship and learning by developing and disseminating books, journals, and digital resources of enduring value to scholars, students, library users, policymakers, and readers worldwide.

Welcome to Our New Blog 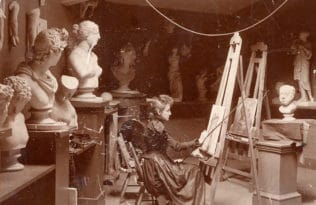