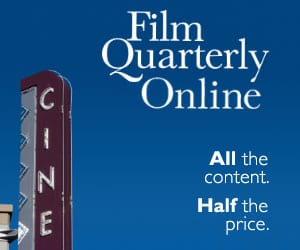 Film Quarterly has been publishing substantial, peer-reviewed writing on motion pictures since 1958, earning a reputation as the most authoritative academic film journal in the United States. Its wide array of topics, perspectives, and approaches appeals to film scholars and film buffs alike.

And the all-new Filmquarterly.org is now live. There, you can: