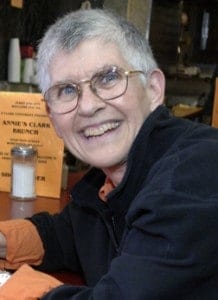 Cynthia Enloe, a research professor in the Department of International Development, Community, and Environment at Clark University, has been honored with the Howard Zinn Lifetime Achievement in Peace Studies Award.

Granted by the Peace and Justice Studies Association, the award recognizes Enloe for her work as a “scholar-activist” in gender studies and international politics, which has been used widely in peace studies. As her website summarizes, Enloe’s scholarship “has focused on the interplay of women’s politics in the national and international arenas, with special attention to how women’s labor is made cheap in globalized factories. . . and how women’s emotional and physical labor has been used to support government’s war-waging policies.” Enloe’s most recent book, Nimo’s War, Emma’s War: Making Feminist Sense of the Iraq War (2010), elaborates on these themes by detailing the experiences of eight women—four Iraqis and four Americans—over the course of the Iraq war.