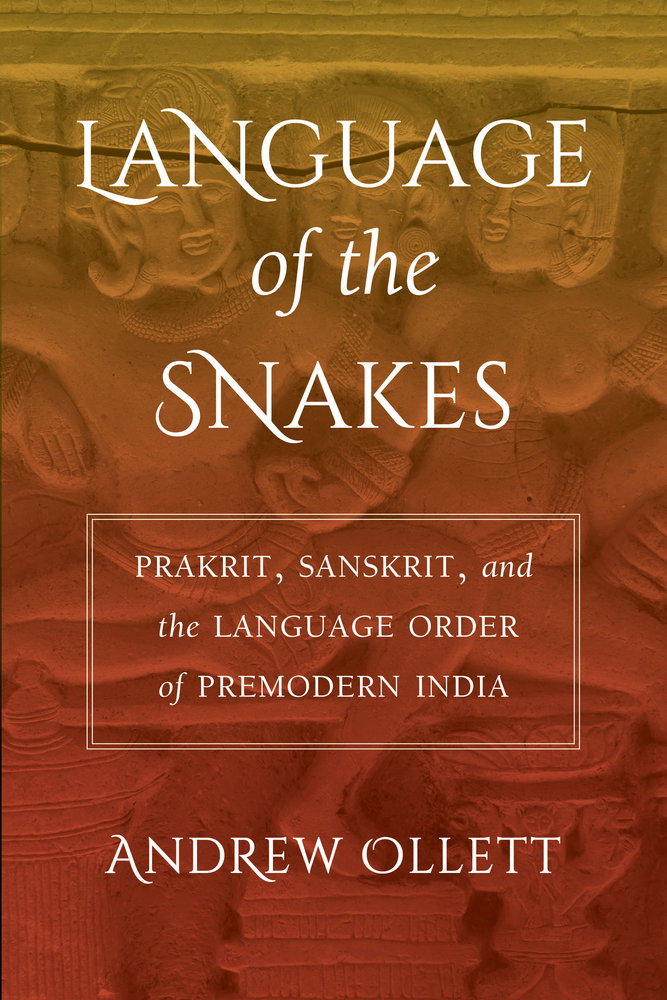 In the eighteenth-century, the scholar Mirza Khan observed that India had many languages, but as far as languages in which literature was composed, there were only three: Sanskrit, the “language of the gods”; the vernacular, the “language of men”; and Prakrit, the “language of the snakes” (nāgabānī) who lived below the earth. Sanskrit was, still in the eighteenth century, the one of the main languages of literary expression and intellectual pursuits. The vernacular languages—closely related to the modern languages of India, such as Hindi—were quickly gaining ground. But what was Prakrit, this third thing? Where do we place it in relation to Sanskrit and the vernacular?

Sanskrit and Prakrit, like other languages, are both natural phenomena and cultural practices, and Language of the Snakes offers a history of Prakrit as a cultural practice. And precisely because of its status as a “third thing,” Prakrit’s history offers a unique perspective onto the dramatic changes in the ways that language in general was thought about, represented, and used—what I call the “language order” of a culture.

That history begins about seventeen centuries before Mirza Khan. At the turn of the common era, a new kind of literature was appearing all over India. This “art-literature,” called kāvyam in Sanskrit and kavvaṁ in Prakrit, was composed in both languages. They were in competition with each other, but the competition was never very serious. Sanskrit was already well-established as a language of ritual and its associated systems of thought, whereas Prakrit was new, and cultivated mainly in the Deccan plateau, in what is now the state of Maharashtra. What’s more, Sanskrit and Prakrit were closely related, like Italian and French. Composing in one rather than another was more of a matter of aesthetic choice than anything else. Within the rapidly-spreading discourse of “art-literature,” Prakrit authors staked out the genre of lyric poetry, and especially the short, suggestive, and erotic verse that is collected in an early anthology called Seven Centuries. One of its verses reads:

What he was lucky enough to enjoy,

and what daring risks I took,

which no woman should take—

the floodwaters of the Gōdāvarī river know,

and the small hours of monsoon nights.

In such verses, a new aesthetic sensibility found expression in a new literary language. Both were destined to become enormously popular, and form part of a cultural package that spread throughout much of Southern Asia. After roughly a millennium, Prakrit literature was not only studied from Kashmir to Kerala; it was a central component of “the literary” itself. During this period it was considered identical to Sanskrit on some level, and at the same time, completely opposed to it. The complementarity of Sanskrit and Prakrit was deeply embedded in representations of language in India, the most enduring among them being the threefold schema to which Mirza Khan referred. This meant that to think about language meant to think about the sets of oppositions that Sanskrit and Prakrit offered, and to use language, in a literary text at least, meant to choose either Sanskrit or Prakrit.

A Specter is Haunting Asia - The Specter of Authoritarianism
Are Children Ruling the World Yet?