Janet and David Carle have completed their travels through Europe and Turkey, investigating water issues on the 38th parallel. Their last two stops in Turkey were the vast, alkaline Lake Van, and Hasankeyf, an ancient city on the Tigris River. In the fall, the Carles will continue their 38th parallel travels in Asia. 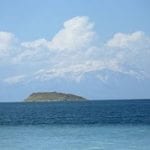 A vast inland sea with alkaline water whose strange chemistry produces large calcium carbonate structures underwater, in a dramatic setting with snow-covered mountain peaks, and a lake level that is thousands of feet above sea level…that sounds exactly like Mono Lake, our starting place for this 38th parallel exploration, but it also describes Lake Van, the largest lake in Turkey….Read More

Will Hasankeyf’s Heritage be Lost to a Tigris River Dam?

Hasankeyf (37°42’N; 41°24’E) is an ancient city carved into the rocky bluffs along the Tigris River. The site has been continuously occupied for more than 10,000 years, and its setting among rolling hills and sheer cliffs along the river is breathtakingly beautiful. The town is threatened by plans to build the Ilisu Dam on the Tigris River…Read More