This week in their travels along the 38th parallel, Janet and David Carle continued west, finding connections to water and the environment in a former pirates’ cave along the Ohio River, Kaskaskia Island on the Mississippi, and the Population Center of the United States in Edgar Springs, Missouri. They watched the sunset with migrating birds at the Quivira Wildlife Refuge in Kansas, witnessed the effects of mining groundwater from the Ogllala Aquifer, and traveled the Santa Fe Trail. 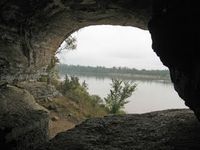 Down the Ohio to the Mississippi

We’ve been exploring one slice of the vast Ohio River watershed ever since we entered West Virginia: the New and Gauley Rivers, the Kentucky River, and the main course of the Ohio itself….Read More 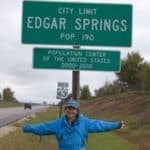 A Pioneering Pioneer Forest and the Population Center of the U.S.

Wendell Berry had suggested a visit to the Pioneer Forest in Salem, Missouri (37°34′) to learn about a half-century long experiment in sustainable forestry….Read More

Well, we discovered there ARE seagulls in Kansas, and lots of them. Also cormorants, white pelicans and phalaropes. Central Kansas has the largest inland wetlands in the country….Read More

We had experienced a lot of surface water when we visited the wildlife refuges in the middle of Kansas. Farther west, we are now in an entirely different water basin, a portion of the vast Ogallala Aquifer that extends from Nebraska down to Texas….Read More 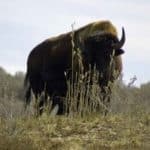 Across much of Kansas, the historic Santa Fe Trail closely follows our target latitude line and, not coincidentally, also closely follows the Arkansas River, the major surface water source in this part of the country….Read More

Full Circle on the 38th Parallel