By Guthrie Ramsey, author of Who Hears Here? On Black Music Pasts and Present

Who Hears Here? is part of the UC Press Phono: Black Music and the Global Imagination series

I wrote the essays in my new book Who Hears Here? On Black Music Pasts and Present over twenty-five years. These writings show, among other things, my participation in the ongoing institutionalization of Black music research over the past thirty years. I began this journey at a moment when the American Musicological Society was forced—by the initiatives of an interracial group of scholars—to confront its exclusionary practices.  As scholar Carol Oja has written, when the AMS’s Committee on Cultural Diversity was formed and began its work to counter sexism and racism in the early 1990s, “[w]omen, people of color, and other minoritized members were mostly absent from the organization’s power structure, including both its elected leaders and awardees of prizes and fellowships.”

On the one hand, one could say that my career and other indicators demonstrate that inroads have been made regarding musicology’s problematic racial history.  On the other hand, urgent ongoing calls for equity and fair practices in the field have been instigated by social media hashtags like #AMSSoWhite and highlight the need for further action. Similarly, other music disciplines have exploded with similar awkward moments in their racial reckonings. This book’s content was written in the pre-social media days up to the present era activism: Black Lives Matter, #metoo, #sayhername, and recent efforts to decolonize the music curriculum.

These essays carry resonances of the conversations I’ve had in bars and hotel rooms during professional conferences, in the deliberations published in the pages of journals and blogs, and in the firestorms that occur on Twitter feeds.  At the same time, this work documents my engagement with the joys that music making and listening inspires—along with my insistence on the undeniable place Black music holds in global cultures.  At a moment when more voices are becoming “unleashed” and adding their songs and stories to the shape of music history, I’m pleased to offer my various takes on the musicians, styles, and topics that have held me spellbound for more than three decades.  I hope you find something of value in Who Hears Here, the work of an accidental musicologist who wanted to know, among other things, who was doing the hearing, the making, and the explaining. 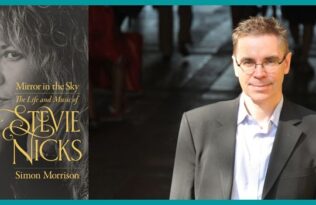 Q&A with Simon Morrison , author of Mirror In the Sky