Stolen Wealth, Hidden Power is a staggering account of the destruction wrought by mass incarceration. Finding that the economic value of the damages to Black individuals, families, and communities totals $7.16 trillion—roughly 86 percent of the current Black–White wealth gap—this compelling and exhaustive analysis puts unprecedented empirical heft behind an urgent call for reparations.

Author Tasseli McKay is a National Science Foundation postdoctoral research fellow at Duke University and a social scientist at RTI International. She holds a doctorate in social policy from the London School of Economics and is lead author of Holding On: Family and Fatherhood during Incarceration and Reentry.

What does this book add to the conversation about criminal legal system reform?

Mass incarceration is a mass atrocity. The scientific record is absolutely clear on this and I hope the  book helps to impress on all of us that the scale of racial criminalization and imprisonment that we have  accomplished over the last forty or fifty years was not just misguided or problematic; it’s been catastrophically successful at doing exactly what some of its early architects hoped it would do: curtail  the political and economic power of communities of color.

When we talk about mass atrocities—and in the US, we have plenty, beginning with the founding atrocities of chattel slavery and the genocide of indigenous people—Americans are just desperate for those things to be in the past. But they will continue to define the present until we face them, until we reach beyond just changing the laws that made those harms possible and finally take steps to reverse the damage that’s been done.

What I hope people working on criminal legal system reform will take away from this book is the idea that ending the policies that make mass incarceration is urgent and critically important. And doing that still won’t be nearly enough to stop the deep, intergenerational reverberations of its harm. We need  reparative policy-making in real time, where we clean up the damage of an old set of harmful policies  before we declare ourselves to have moved on.

How do you anticipate this book can change the way people currently think about reparations?

I want to bring some reality to the conversation about reparations. The dominant arguments out there  against reparations allow folks to state their opposition in ways that don’t expose an investment in white  supremacy, and those arguments have stalled the reparations movement for literally hundreds of years.

For those who oppose Black reparations because they view the harms of chattel slavery and Jim Crow  as operating in a distant past that no longer affects us, and for which we are not responsible (which of  course I disagree with), this book brings proof that an equally systematic, legally enforced regime of  racial harm is alive and well in the present day. For those who question how we could possibly calculate  the debt owed, this book adds up the bill and shows the math. I could go on, but the point is: If you take  in the evidence I’ve presented in this book and you still oppose reparations, there is an invitation there to get real about why.

You argue that we need to take some lessons from other countries in enacting reparations for  US mass incarceration. Can you say more about that?

There’s an enduring sense of American exceptionalism underlying some of our biggest domestic policy  mistakes, and this is one. It’s crystal clear from the international record that countries do not just move  on after instances of mass atrocity—whether it’s genocide, apartheid, racial terrorism, or (as in the US)  all of the above. The social and economic harms have to be actively confronted and repaired.

We know from global transitional justice processes like those in Yugoslavia, Rwanda, Argentina, and  South Africa that putting an era of mass atrocity to rest requires three things: truth-telling, reform of  abusive institutions, and reparations. Those tasks still lie ahead of us in the US, not just for mass incarceration but for all the forms of racial harm and atrocity that have preceded it since our founding.  From this perspective, it’s not at all mysterious that racialized poverty is so powerfully entrenched here,  that Black and Native communities on this continent continue to face such extreme adversity.

The good news is, these are not intractable policy problems. We just haven’t yet done the work.

What do you see as the role of non-Black folks in the movement for Black reparations?

There are plenty of moments in racial justice movements where non-Black folks with racial privilege,  especially those of us who are white, have been too loud, too soon. There are so many places and  times where we need to step back, stand down, and just be quiet for a minute.

What’s odd against this backdrop of loud white presence is that when it comes to reparations, white  people—except maybe those who are vocally against reparations—have been mostly silent. It’s almost  like all the “diversity” talk and the “I acknowledge my white privilege” talk that takes up space in racial  justice conversations is a way for white folks to stay quiet about the one thing we don’t want to do: give  up some of what we have.

But what if racial justice means, at its core, that we need to collectively give back what’s not rightfully  ours? If you suddenly wake up to the fact that you are in possession of something stolen, you don’t wait  for the folks it was taken from to come knocking and have to ask for it back. It’s on you to make sure that what was collectively stolen is collectively returned.

Black communities have offered tremendous intellectual and activist leadership on questions of  reparations. The role of white folks is to get on board with Black reparations demands and to commit to  backing and relaying these demands—faithfully, loudly, and persistently—to our elected officials until  reparations are made at full scale. I follow reparations scholar and theoretical economist Sandy Darity  in thinking that “full scale” means erasing the wealth gap completely. We can and absolutely should be  guided by how Black activists and intellectuals formulate the demands, but this is our water to carry. It’s  on white people to make this happen.

You describe Stolen Wealth, Hidden Power as a ghost story. What do you mean by that?

One of the things I most hope this book shows is that the distinction between past and present is  fictitious. The sociologist Avery Gordon, whose work Darity pointed me to after I wrote the book,  expresses this beautifully. The idea that “the past is the past” is a phenomenally convincing fiction, one  that is necessitated by a long history of racial atrocity. We should be more than a little suspicious of this  American way of insisting, often angrily, that the past is “over.” How can that be? Especially in the  context of late capitalism, where the very nature of our economic system ensures that the present is  literally built on the assets and debts we’ve carried over, always with interest, from the past.

But the book is also a ghost story in a very personal way. I wrote it with my granny, who is no longer  alive, next to me. I explain a bit in the preface how this work is one way for me to take hold of the  complicated legacies left by my granny and the well-intentioned, abolitionist Quakers she came from.  She haunts me because she loved me so well. And she haunts me because, collectively speaking, our  people have made profoundly consequential mistakes and there is work to be done to correct them.

Ghost are real. And we feel haunted because we are. 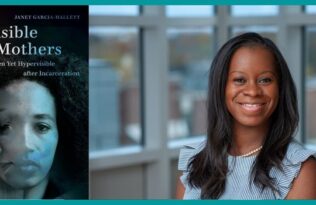