Although we are unable to see you in person at this year’s Middle East Studies Association conference, we’d still love for you to “stop by the booth” and meet with us virtually. Our Editors are taking brief Zoom appointments over the next couple of weeks.

“The transnational turn is particularly urgent and apt in Middle East Studies where, from the so-called ‘Arab Spring’ to ISIS, as well as authoritarian counter-revolutions, and Western interventions, all call into question the teleologies of 20th century Arab national histories. I’m excited by projects that rewrite the history of the Middle East given the hindsight and pressing questions revealed by today’s transnational political economy, religious and cultural resurgences, democratic aspirations and counter-revolutions.

Most of the scholars I publish in Middle East Studies are historians but we also publish anthropologists and sociologists and occasionally political scientists. We publish major scholars who redefine their fields. Recent highlights include Ussama Makdisi’s Age of Coexistence, On Barak’s, Powering Empire: How Coal Made the Middle East and Sparked Global Carbonization, Judith Tucker’s Making the Modern Mediterranean, Nicola Pratt’s Embodying Geopolitics and Khaled Fahmy’s In Quest of Justice. We are particularly strong in Palestinian Studies as well as on other parts of the Eastern Mediterranean and Northern Africa, but I am very interested in projects on the Gulf as well.”

Interested in publishing your work with Niels and UC Press?
Schedule a meeting. 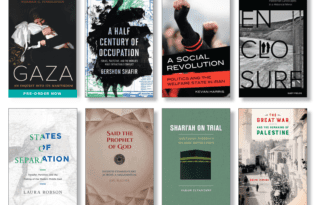 Meet Us at MESA. Save 40% on These Middle Eastern Studies Titles