For Juneteenth—today’s holiday commemorating Union army general Gordon Granger’s reading of federal orders in Galveston, Texas on June 19th, 1865, proclaiming that Texan slaves were free (in light of the fact that the Emancipation Proclamation had declared all slaves free two years prior)— UC Press acknowledges this celebratory day (and the need for it to be a mandated federal holiday) with an excerpt from Workers on Arrival: Black Labor in the Making of America by Joe William Trotter Jr.

Covering the last four hundred years since Africans were first brought to Virginia in 1619, Trotter traces black workers’ complicated journey from the transatlantic slave trade through the American Century to the demise of the industrial order in the 21st century. At the center of this compelling, fast-paced narrative are the actual experiences of these African American men and women. A dynamic and vital history of remarkable contributions despite repeated setbacks, Workers on Arrival expands our understanding of America’s economic and industrial growth, its cities, ideas, and institutions, and the real challenges confronting black urban communities today.

African American workers fought back against the conditions in their daily lives by creating a variety of institutions to improve their collective security, both physical and economic. Some of the earliest recorded community institutions were founded in the northern cities. As early as 1787, a group of Boston hairdressers, cooks, bootblacks, and other workers dominated the charter roster of the Prince Hall Masonic order. Prince Hall, the founding leader of the African American Masonic movement, had himself worked as a skilled leatherworker and soapmaker. The Masons soon formed female auxiliaries and established mutual benefit funds, staged public parades, and served as bulwarks against economic insecurity for their members. Similarly, in 1805, some twenty wage-earning free black Bostonians founded the African Meeting House, later known as the First African Baptist Church. In addition to spiritual and material support, early African American churches and fraternal orders aimed to combat racism against black men and women on the streets of Boston and elsewhere. “Much more on public days of recreation,” Hall said, “how are you shamefully abus’d    The arrows of death are flying about your heads; helpless old women have their clothes torn off their backs, even to the exposing of their nakedness.”

At the same time that Bostonians founded their first independent institutions, black Philadelphians met in a blacksmith shop and formed the Free African Society (FAS). A mutual benefit and religious organization, the FAS laid the foundation for the African Methodist Episcopal (AME) Church (“Mother Bethel”) in 1794. Richard Allen, ex-slave and founding minister of Mother Bethel, had worked in a broad range of jobs—as butcher, woodcutter, day laborer, brickyard hand, salt wagon driver, and shoemaker—before spearheading the founding of the AME Church. Allen would also soon take a hand in collecting and transporting dead bodies during the outbreak of the city’s yellow fever epidemic in 1793. Carpenters, shoemakers, church sextons, and a variety of general laborers and household service workers, including William Miller, James Varick, and Peter Williams, Sr., established New York City’s African Methodist Episcopal Zion Church (AMEZ) in 1796, Pittsburgh’s Bethel African Methodist Church in 1800, and a plethora of other fraternal orders and churches in the northeast and the Ohio Valley in the early years of the nineteenth century.

In the South, too, black workers were leaders in African American community building. Calling themselves the African Methodist Bethel Society, the founding faction of black Methodism in Baltimore included a mix of skilled and general laborers such as blacksmiths and draymen. Morris Brown, a free black shoemaker, and nearly 4,400 enslaved and free blacks broke away from Charleston’s white Methodist Church in 1818. They formed a new African Methodist Episcopal Church under the jurisdiction of the independent Philadelphia-based AME denomination. Four years later, however, in the aftermath of Denmark Vesey’s slave revolt, authorities destroyed the Charleston church, dispersed its members, and drove the minister from the city in a wave of violent repression. The black church movement had also faced an uphill battle in Savannah, where Andrew Bryan, a slave on the plantation of William Bryan, and other enslaved blacks suffered severe whippings for daring to hold services for their enslaved brothers and sisters in the early aftermath of the American Revolution. The Savannah group persevered, and by early 1788, Bryan received official ordination as a Baptist minister, and the city’s First African Baptist Church commenced service. Nearly a year later, Bryan purchased his freedom and served the church as minister until his death in 1812. Under the leadership of Bryan and his successors, the independent African Baptist Church spread across the small-town and urban South.

As suggested by the frequency of the term African in the names of early working-class black institutions, their founders were energized by their African heritage. They enthusiastically articulated their institution-building activities in black nationalist terms. Invocations of African culture and identity were not merely rhetorical strategies. They represented a complicated mix of spiritual, intellectual, political, and material commitments and considerations. In his innovative study of nineteenth-century black religion, politics, and ideology, historian Eddie Claude convincingly argues that the founders of early black institutions appropriated the biblical Exodus story to forge a black nationalist consciousness. This narrative of deliverance, retribution, and finally “promised land” provided African Americans with “nation language” that allowed them to critique and challenge enslavement and constraints on their civil and human rights.

Archaeologists as time travelers? A virtual Q&A with Mark McCoy
Dismantling the Police and Prisons: A Reading List 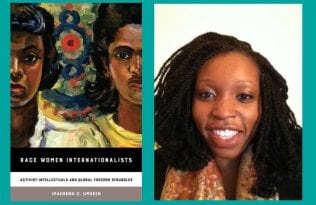 The Women Who Challenged Inequality of People Across the African Diaspora