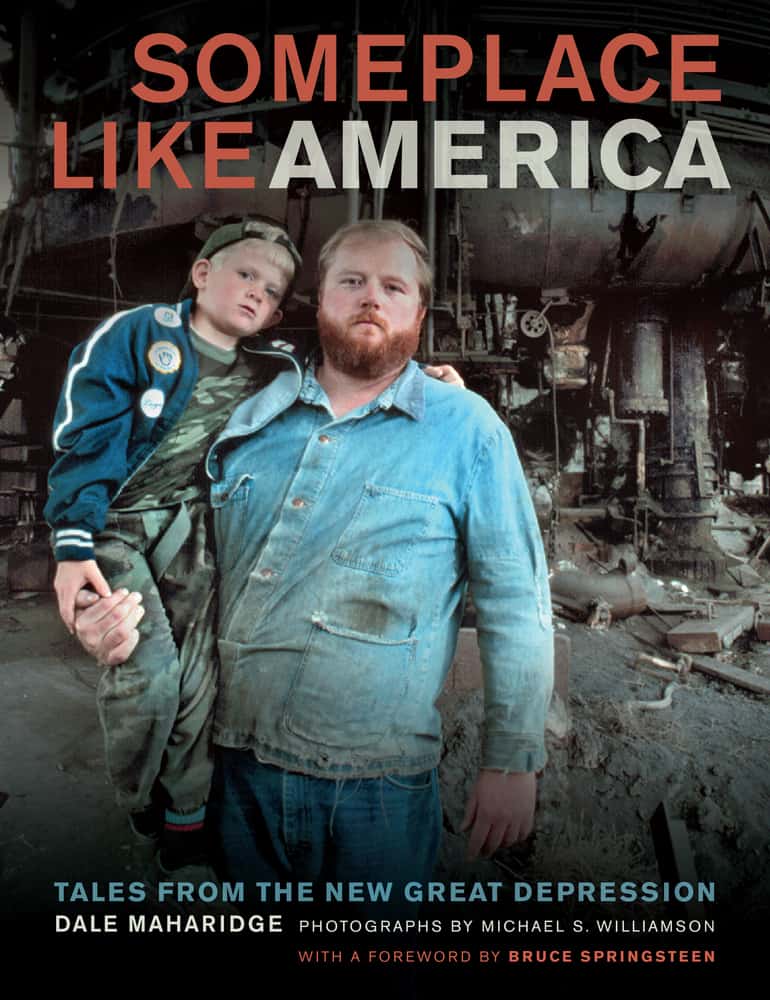 winner Dale Maharidge has worked for decades as a journalist chronicling the lives of the working poor across America. During that time, he saw how growing income inequality in working class towns lead to the reactionary populism that we now see in this country.

Maharidge states: “Right now, people feel alienated. And they are disconnected from each other. A lot of the initiatives I am writing about, a lot of them are building communities. Through that, people can meet each other, know each other, give money to each other. That’s what any nation is about, it’s about community. And Americans, a lot of the people over the years are going to see a part of it. When you reinstall a sense of community, you also create a political stability, and you get democracy. When people feel disconnected and powerless you get authoritarian regimes.”

In the updated edition of Someplace Like America: Tales from the New Great Depression, Maharidge and photographer Michael S. Williamson share the experiences of this community:

My America is also seen up close in the eyes of its people. They are eyes that speak without words.

Among those Michael and I remember the most: The eyes of a woman who has fallen from upper-class privilege and is now standing in a charity food line are still proud and hurting a year after she lost the big home. A frugal white-collar mom, raising children on her own, works two jobs year-round, in some seasons, three; her eyes fill with tears as she talks about how she is barely surviving. A waitress in her sixties, whose tips are way down, will never be able to retire and believes she’ll work until she falls dead; her sleep-deprived eyes gaze into a realm of numbness as she sprints between tables. Unbridled fear is in the eyes of a Latino man, a U.S. citizen, who is terrified of being stopped and once again bloodied by cops who assume that he’s undocumented because of his brown skin.

There are so many more, named and nameless, thousands of eyes. … The eyes you see tell a story of decades of economic assault.

There is something else visible in these eyes: toughness. Study the image of Ken Platt and his son on the cover of [Someplace Like America] — both generations epitomize this steel-like resiliency. Or turn to the second section of photographs and look into the eyes of the woman who has just come home with her husband to a little shanty made of blankets strung over wooden poles, hidden in the bushes beside the Colorado River, after she has put in a long night shift working at a casino. You cannot defeat people with eyes like these.

Maharidge reminds us that people and community are still at the heart of America:

This is not a wonky book about government policy or the merits of specific economic remedies. Rather, it aims to describe the human side of where we are today, trapped in an economy whose fruits have been denied to a majority of Americans.

It has taken thirty years of war against working-class Americans to get where we are. It may take a generation to get out of this mess. We are at a cultural and economic turning point. One era has ended; another, as yet unnamed, is dawning. How will it be shaped? As we begin to understand the pointed, painful questions that must be addressed, perhaps we can begin to change.

After a long career as a journalist and documentarian, I’m deeply disillusioned and cynical about our political and business “leaders.” They have failed us, repeatedly.

Yet I am ever the optimist about the American people. One thing I’ve discovered in all these years of hearing Americans talk about their lives and dreams is that collectively we are strong. We are survivors. We emerged from hard times in the 1930s. We will do so again and will begin the long process of rebuilding an economy that works for everyone, but this can happen only if we relearn some lessons about caring for and relying on one another. And relearn we will, for we have no other choice.”

Elementa: Science of the Anthropocene Call for Papers: Ocean Science
A Free Press Is Our Greatest Ally