by Sarah Horton, author of They Leave Their Kidneys in the Fields: Injury, Illness, and Illegality among U.S. Farmworkers 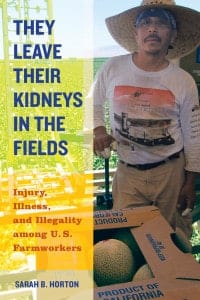 You write in your introduction that your book is based on nearly a decade of research on the health of the same group of migrant farmworkers. What are the advantages of a longitudinal approach?

Originally, I had not intended to conduct a longitudinal study of my interviewees’ health. Yet as I continued to follow the same individuals over time, I was shocked to find that women younger than I had developed hypertension, that men younger than my own father were diagnosed with kidney failure. I came to the realization that my data provided a sequential snapshot of my interviewees’ declining health. And I began to see that understanding the cumulative health insults farmworkers suffered in turn was key to explaining their work ailments—and in particular, why they died from heat at work at a rate higher than any other occupational group.

A longitudinal approach has the advantage of allowing me to witness first-hand the unfolding of the major health challenges migrant farmworkers face: diagnoses of chronic disease made in the Emergency Room after hemorrhages and strokes, of diabetes through chance employer-provided screenings, of chronic kidney disease at its end-stage. It allowed me to “see” the hidden relationships between macro-level forces and the chronic illnesses migrant farmworkers face, such as how immigration and work stresses get under their skin and culminate in higher rates of chronic disease. And it allowed me to trace the connections between migrants’ chronic diseases—which the public health world often treats as though separate, bounded entities—and the illnesses they develop at work, which in turn were shaped by U.S. immigration and labor policies. In short, a long-term perspective helps illuminate the compounded effects of social inequality over farmworkers’ life-course, deepening the synchronic snapshot often provided by ethnographic immersion.

Why do you focus your book on the issue of heat death? What do you want readers to take away about the causes of heat death among migrant farmworkers?

From the perspective of a casual reader of a newspaper over a morning cup of coffee, heat deaths in the nation’s fields may appear an unfortunate and perhaps inevitable by-product of global warming and rising temperatures. What I aim to show in my book is that this perspective naturalizes a public health problem that is socially and politically produced, and therefore entirely amenable to intervention. I show that farmworkers’ historic exemption from the labor protections that middle class Americans take for granted forces them to expend exceptional effort to keep their jobs, all the while recently-intensified immigration control policies entangle them in new forms of legal compromise that make them even more vulnerable at work. Yet, of course, heat death isn’t merely a matter of farmworkers’ vulnerability at work; it implicates a host of other systems—the health care system, the disability and retirement systems, and even our current food safety system—that systematically fail this vulnerable population. This book documents how a web of public policies and private interests create health outcomes anomalous in a modern industrialized nation.

Thus heat death is merely the narrative hook for a broader story about how U.S. policies produce the worse health outcomes and shorter lifespans of migrant farmworkers. Because this book uses farmworkers’ narratives and experiences as the raw material from which to create this critique, it serves as a kind of social epidemiology detective story.

Why do you make your primary focus the changing circumstances of the same set of families over time? How does this change your own positionality and obligations as a researcher?

A primary aim of this book is unabashedly humanistic—that is, to convey the texture of farmworkers’ everyday lives such that their worlds appear less foreign to readers. To help accomplish this, I follow the lives of a cast of characters over time. This allows readers to acquaint themselves with farmworkers as individuals and to watch as events in their lives unfold. It highlights the diversity in immigrant farmworkers’ experiences, as readers inhabit the shoes of male and female farmworkers and those at varying stages in the life course. Moreover, I also use it with the goal of attribution—that is, of decentering ethnographic authority and giving my migrant interlocutors their due.

Situating my research among migrant farmworkers themselves implies a particular set of loyalties and, in turn, a corresponding set of obligations. While this positioning provided me a window onto the vulnerabilities of migrants’ lives, it also gave me access to the illicit strategies farmworkers must use to circumvent immigration policies, find work, and survive economically. Because intensive engagement with vulnerable populations makes visible a population that often aims to remain invisible, researchers need to carefully consider the issue of dissemination—what we say and before what audiences, what we leave unspoken, and whether academic scholarship should be accompanied by a plan for public dissemination and engagement.

Finally, intensive engagement with vulnerable populations requires action. Witnessing the daily struggles of immigrant farmworkers compels a form of moral engagement that stems from empathic listening. A turn towards advocacy and activism is a logical extension of the norm of reciprocity that underlies anthropologists’ intense engagement with our subjects.

Sarah B. Horton is Associate Professor of Anthropology at the University of Colorado, Denver.