Since their last update from western China, David and Janet Carle have traveled to Turkmenistan’s capital city, Ashgabat—halfway around the world from their home in Mono Lake, California. Read on to hear more about their cultural adventures along Turkmenistan’s extensive canal system, and follow the links to their blog, Parallel Universe 38° North: The Water Line. The Carles’ book The 38th Parallel: A Water Line Around the World will be published by UC Press in Fall 2012.

David Carle is the author of several UC Press books about California’s environment, most recently Introduction to Earth, Soil, and Land in California.

In Turkmenistan: Half-way Around the World from Mono Lake 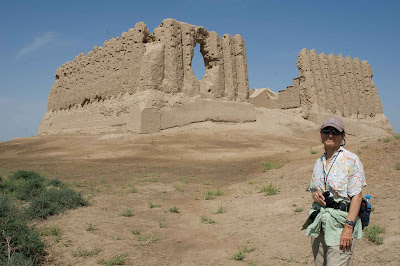 Half-way around the world from home, the GPS told us we had reached the 61°East longitude in Turkmenistan. The 38° latitude line intersects in Mono Lake with the 119°West longitude: 61 + 119 = 180° around the globe! Local clocks are 12 hours different from California (as bad a jet-lag problem as there can be, we would learn; after Turkmenistan we were homeward bound).

We landed in Ashgabat, the capital and largest city (37º58’N) and drove straight east toward Merv, the most influential ancient city they never taught us about in World History. Half-way there we stopped at that half-way around the world longitude point and took a photo beside a reservoir that stores Karakum Canal water. The canal was begun in 1954 when Turkmenistan was part of the U.S.S.R. and diverts 50% of the water that used to feed the Aral Sea, in Uzbekistan. It moves water almost 600 miles, one of the longest aqueducts in the world, to Ashgabat and to farms along the way. …

Last Stops on the 38th Parallel, For Now

Moving West on the 38th Parallel 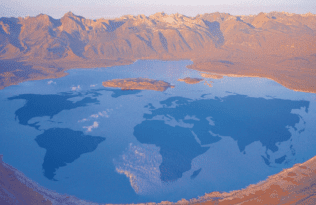