To commemorate Martin Luther King Jr.’s life and legacy, we share an adapted excerpt from the new book King and the Other America: The Poor People’s Campaign and the Quest for Economic Equality by Sylvie Laurent, which explores the depth of wisdom King brought to the movement for economic justice. His vision was an interracial effort that sought to bring together all impoverished Americans to demand better wages, jobs, homes, and education in the pursuit of true equality for all.

—it is saying that every man is an heir to a legacy of dignity and worth.”

If today Americans are fully aware that the United States exhibits impressive disparities of wealth between rich and poor, this recognition was not the case in the 1950s and 1960s. In those early postwar decades of sustained economic growth, American families enjoyed the shared prosperity of an egalitarian society in which income, savings, and wealth were not so starkly concentrated in the hands of a few top wage earners. Yet, precisely because everyone seemed to benefit from a fair distribution of wealth, King and others worried about the invisibility of those left behind.

King perceptively called for strong federal policies and national recognition of the extent to which the nation had become divided, not only along the lines of race but also the lines of wealth. The Poor People’s Campaign claimed that the unequal access to opportunity and wealth that Americans of color experienced more than anyone else not only offended sacred American values but corroded the social fabric of the nation. A peaceful “army of the poor” would try to send the message previously clearly articulated by Ralph Ellison: “first, something happens to us and then, just wait, it happens to every other group in America.” Ellison referred to black Americans and King would not disagree with such a statement. But he expanded the framework of “us” to all the disinherited, the forgotten, the exploited. The poor who would be brought together in Washington by King’s campaign were indisputably the “miner’s canaries” of the American people.

By denouncing “the tenacious poverty which so paradoxically exists in the midst of plenty,” King was prescient: the growing divide between the haves and have-nots, between a handful of the extremely wealthy and a growing impoverished population, put the very idea of democracy at risk.

King did not live to see his ultimate crusade materialize. The Poor People’s Campaign and the initiatives associated with it turned out to be a living memorial for the leader who was assassinated just weeks before its starting date. For more than a month though, thousands of poor people of all races poured into the capital, by foot, train, or from mule wagons, camping out on the Mall in a shantytown they named Resurrection City. They occupied the space for six weeks and attempted to get the powers that be to take notice. Ralph Abernathy, Andrew Young, Hosea Williams, James Bevel, Walter Fauntroy, Joseph Lowery, and Jesse Jackson strived to carry on their missing leader’s grand scheme.

Although physically absent, King and his vision were omnipresent as his co-visionaries spawned and sustained the forty-five-day march and the six- week encampment in Washington. Although not as confrontational as initially planned, the protesters took disruptive actions, hoping to seize the momentum of President Lyndon B. Johnson’s War on Poverty in order to break into the national consciousness. The main rally of the campaign, held on Solidarity Day (June 19, 1968), managed to draw fifty thousand people to Washington, with demands to combat runaway inequality and, in the words used by Coretta King Scott that day, “the violence of poverty.”

King and the Other America argues that a close examination of King’s political thought entails a dismissal entirely of the assumption that King was a procommunist Marxist—although the definition of “Marxist” is still up for debate as even the German philosopher himself denied being one. King remained a democrat and a Christian to the core, committed to the individual’s natural rights, at odds with basic Marxist premises. He never entertained the overthrow of American democracy or the replacement of it by a regime in which the State would own the means of production (before it too vanished). However, he was certainly “Marxian” in most of his systemic analysis, which was predicated on the conviction that deep historical structures had shaped American history and both the black and the poor experience. King also thought that uniting the oppressed regardless of their racial and ethnic identities was imperative. This Marxian assumption was constantly mobilized by King to analyze race and oppression in America, and the Poor People’s Campaign resulted from such creed.

Rather than a sideshow or a deviation, the Poor People’s Campaign is brought to center stage in these pages and cast as the culmination of King’s lifelong thinking on the nature of justice. I explore its significance, considering a particular subset of issues regarding how King’s thoughts on equality were the product of his own maturation on substantive justice and liberal democracy, and of an intellectual environment that had preceded and has outlived him.

Excerpted and adapted from the introduction to King and the Other America. 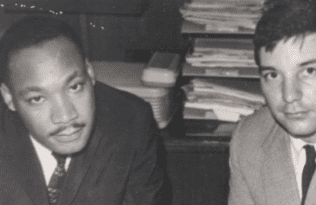