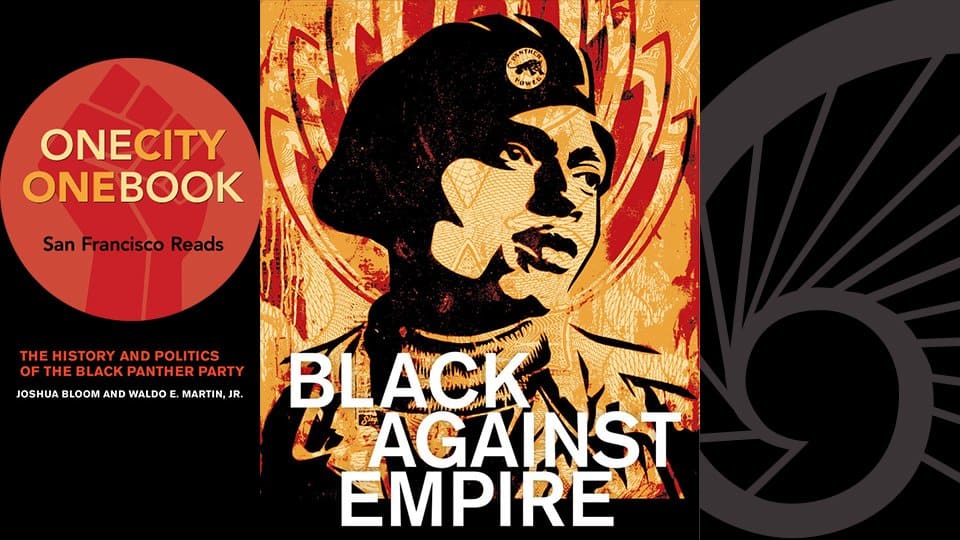 San Francisco’s annual literary event, One City One Book, continues with Black against Empire: The History and Politics of the Black Panther Party, and October is packed with an exciting mix of citywide events. This month, get your hands on history with a close-up look into the library’s archives, head across the Bay and ride to significant sites of the Black Panther Party, join a lively discussion of activism and today’s resistance movements, or find yourself immersed in a topical film at one of the many screenings.

And be sure to mark your calendars for a special event with authors Joshua Bloom and Waldo E. Martin Jr.:

Join authors Joshua Bloom and Waldo Martin in conversation with journalist Davey D Cook as they discuss Black against Empire: The History and Politics of the Black Panther Party.

Meet at DeFremery Park in Oakland Ride your bike to tour sites of importance to the Black Panther Party.

Be part of an experience that brings San Francisco revolution and resistance history to your fingertips. Join us for a close-up show-and-tell of San Francisco history through original manuscripts, newspapers, and photographs which document Black Panther Party and San Francisco’s legacy of resistance. Space limited to 30.

A documentary that chronicles the life of young college professor Angela Davis, and how her social activism implicates her in a botched kidnapping attempt that ends with a shootout, four dead, and her name on the FBI’s 10 most wanted list.

A young African American man meets his white girlfriend’s parents during a weekend in their secluded estate in the woods, but before long, the friendly and polite ambience gives way to a nightmare.

An insightful documentary focuses on San Francisco Public Defender Jeff Adachi as he and his team take on a high-profile case which suggests black-crime bias in ostensibly liberal San Francisco.

Emory Douglas, the Minister of Culture for the Black Panther Party, who created some of the most iconic images of Black Power, in conversation with other artists discussing the intersection of art and activism.

Rob Williams was an African-American living in Monroe, North Carolina in the 1950s and 1960s. Living with injustice and oppression, many African-Americans advocated a non-violent resistance. Williams took a different tack, urging the oppressed to take up arms.

The Irrepressible Politics of the Black Panther Party