by Corey D. Fields, author of Black Elephants in the Room: The Unexpected Politics of African American Republicans What were some of your reasons for writing this book?

When people hear that I am writing a book about African American Republicans, they often assume that I am a lifelong political junkie who feeds off the latest news about polling data and follows the intricacies of intra-party politics with an obsessive passion. They are often disappointed to find out that although I have always had an interest in politics, I was not particularly “into” politics before embarking on this project. (And, honestly, now that it is done, I am probably going to take a little break from all my politics-related Google alerts!)

I began this project because I was interested in unexpectedness – instances where people are doing things you do not expect them to do. It was the unexpected behavior of African American Republicans that struck me as compelling. Nobody expects a black person to be a Republican. Yet, there are a lot of people who do it. So while only a small percentage of black people identify as Republican, the absolute number is nothing to sneeze at. But even if there were only a handful of African American Republicans, they would still be interesting because, in many ways, they (and our responses to them) represent the tension between an ever-expanding horizon of possibilities available to any individual and the constraining expectations that come along with social identities. African American Republicans are a great illustration of how, no matter what you do, the groups you belong to shape how you are perceived and how you move through the world.

So it was not politics, per se, that drew my initial interest. That said, it would have been impossible to write the book without getting a little obsessive about politics. To do this book well required that I ground it in a broader political context.

How were you perceived by the people you were observing and interacting with through the course of your research?

On balance, people were skeptical, but open. There is this perception among African American Republicans that they are treated unfairly, especially in regards to their image in the media. But the sense of unfair treatment is not limited to media images. I don’t think I’ve ever encountered a more skeptical group of people than African American Republicans. At the start, they were a little wary of me and my research. To do the project successfully, it was critical to overcome this hesitance. Initially, some people thought I was out to make fun of them, and the book would be a hatchet job. Others were convinced that I was a Republican myself and the book would just be a puff piece.

Because of this reaction, it was really important to me that the people I was observing knew that I was not working on a partisan book. So, I started out engaging with people in a very “scientific” sort of way. I was vocally agnostic about their politics and tried to withhold judgment even when what they were saying went against my own political beliefs. I think I was pretty successful at that, and I could earn their trust over the course of an interview. As the project progressed, I became closer to some key informants and I was able to challenge their beliefs and express some skepticism about some of their statements. Fortunately for me, there are not a lot of African American Republican activists. So if I was able to convince some key people to trust me, they were able to get me pretty connected to the networks.

Others were incredibly difficult to win over. There were a few people who would only engage in email exchanges and others who refused all my requests for interviews. I am incredibly grateful to all the people who opened up to me to talk about politics and life.

What were some of the most interesting findings you came across during your research? Did you find any commonly-held beliefs about black Republicans to be misconceptions?

There were definitely some surprising aspects to the African American Republican experience. Like most people, most of my exposure to them came from people like Clarence Thomas, Herman Cain, and even celebrities like Stacy Dash. These high-profile African American Republicans shape a lot of the broader perceptions of them. Based on that, I went into the project expecting enthusiastic support for the GOP and a rejection of what is derided as “identity politics.”

The reality turned out to be more complicated. Contrary to perception, all African American Republicans express high levels of racial identification. They see themselves as linked to a broader community and see their fates as linked to other African Americans. However, there is a sharp divide in how important they think racial identity should be. African American Republicans are divided into two groups with different perspectives on the centrality of race to their worldview: color blind and race conscious. Both groups see the Republican Party as offering the best policy program to meet the needs of black communities, but for very different reasons. These two groups also have very different experiences within the party. I was struck by how intense the divisions between the two groups could become.

Also, given the very limited racial diversity within the GOP, I thought the Republican Party would be happy to have any black person hand raising on behalf of the party. That’s not consistent with the experiences of the people I talked to. African American Republicans who embrace the color blind worldview consistent with the leadership of the GOP find themselves welcomed into networks of power, while those committed to racial uplift find themselves marginalized and fighting for a seat at the Republican table. So, for some African American Republicans race acts as a resource, but for others race operates as a constraint.

What do these findings mean for the current presidential election?

A major shift in black support for the Republican Party this fall seems very unlikely. Based on my findings, the GOP has to reconsider how it incorporates black Republicans into the party if it has any real interest in appealing to black voters. It is not enough to incorporate blackness on terms that are comfortable to white leaders. Party leaders’ hesitance to disavow the racism that has fueled the Trump campaign is a perfect illustration of the failure to take the concerns of minority voters (and a number of white Republicans!) seriously.

At a minimum, the party must do a better job of listening to the diverse perspectives among African American Republicans. I think this applies to the entire range of “multicultural” conservatives. Otherwise, outreach efforts to blacks – along with additional “othered” groups in the GOP like Latino, Asian, women, and LGBT voters – seem less than genuine. The success of a candidate like Trump raises questions about who Republican diversity efforts are really aimed at. Is the goal to increase minority participation in the party? Or is the purpose to have minorities around to provide cover to the more unsavory racial conservatism that has taken root within the GOP? My findings suggest the former.

Launching from the Bottom Rung: Grit and Hope and Reality Changers
A Comic-Con Reading List 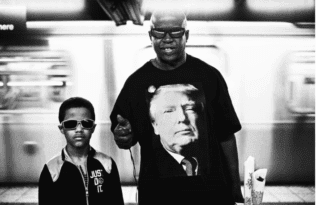