This guest post is published in advance of the American Society for Environmental History conference in Washington, DC. UC Press authors share their research and stories that reflect on this year’s conference them, Turning Protest into Policy. Come back for new posts every weekday until March 19th. 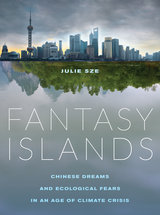 My book, Fantasy Islands: Chinese Dreams and Ecological Fears in an Age of Climate Crisis, examines the eco-city phenomenon through a case study of four recent ecological developments in Shanghai. The book is focused on two main questions: what does the rise of eco-cities in both government policy and popular imagination mean; and what does the eco-city phenomenon mean in China, and in the United States. My initial interest was sparked by my family connection to Chongming Island, where Dongtan Eco-city was proposed, and which seemed an utterly improbable place to site a high-tech ecotopian city.

In attempting to understand why and how eco-city developments are flourishing, especially in China, I develop a concept of eco-desire. Elsewhere, I have written about the intellectual history of the eco-city.[1] These eco-desires are complex, and competing, in different national, regional and racial contexts, but the broadest reasoning behind eco-desire is to address anxiety in the face of global climate change.

My first book, Noxious New York, focused on environmental justice activism in New York City, and is connected to the conference theme of “Turning Protest into Policy.” Rather than a US centered narrative of eco-Davids fighting corporate Goliaths, the narrative here is fundamentally different. That difference is not in and of itself surprising given the Chinese Communist Party’s power and much more extensive suppression of protest movements- environmental or otherwise. But in many ways, the stories in Shanghai and New York City are deeply interwoven. They are linked through the focus on place, power, globalization, privatization, and the emergent urban discourse of sustainability. The question that remains, after the bells and whistles of techno-utopian fantasies: is what does sustainability mean, how and for whom?

Julie Sze is Associate Professor of American Studies and founding director of the Environmental Justice Project for the John Muir Institute for the Environment at UC Davis.

Turning Protest into Policy in the Indus Basin
Skiing into Modernity