Excerpt from Has the Gay Movement Failed? by Martin Duberman

Edited and abridged from the chapter “Equality or Liberation?” 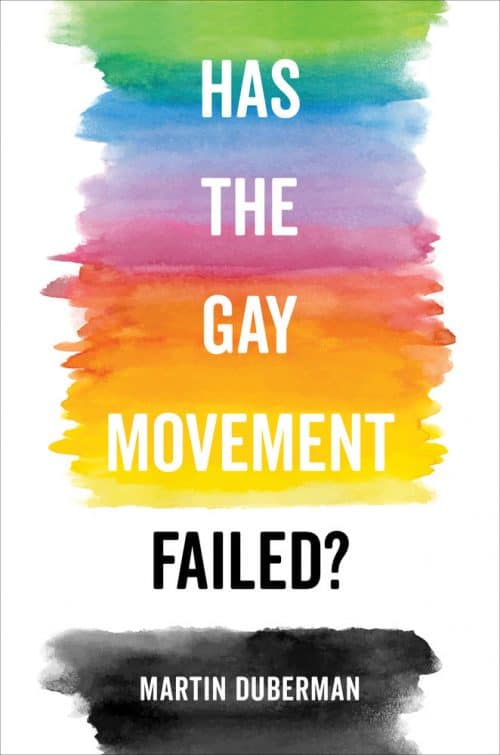 The difficulties of a gay lifestyle have generally been glossed over as inconvenient when waving the banner of Gay Pride (that glib, ubiquitous phrase which regularly alternates with the equally fatuous “Gay is Good”). That sort of self-aggrandizing sloganeering is a disservice on several levels: since life is hard for damned near everybody, it suggests that we’re somehow immune—rather than uncommonly susceptible—to the everyday hazards of being alive. It also keeps us from acknowledging to ourselves the particular pitfalls of being gay–an essential first step in learning how to cope with them.

As I’ve already itemized (the greater mutuality and satisfaction that characterize our coupled relationships, the fact that gay men exhibit greater empathy and altruism than do heterosexual men, etc.), there’s much to affirm and even celebrate about gay life. However, to exclusively stress its positive aspects—”the politics of affirmation”—amounts to the kind of denial intrinsically bound up with the bland assertion, so commonplace these days, that we’re just as “normal” as everybody else—and to be normal in the American bowl-of-cherries version of reality means to be problem-free (or to pretend to be). The pretense that our lives are untroubled is a double disservice to ourselves: if nothing’s wrong, we have no incentive to better understand the source of our pain or to seek constructive ways for alleviating it—nor to understand and hold accountable “the structures of society” (as Toby Manning has put it) responsible for the “minority stress” we sometimes suffer from. . . .

If the “source” of our isolation and depression lies in society’s lethal mistreatment of us—and it does—why don’t we, as they did in GLF, wake up politically, mobilize our collective strength and actively assail the engulfing walls of prejudice that enclose us—and which do show signs of weakening and decay. Controversial though the findings are regarding LGBTQ “mental health”, one conclusion is obvious: Gay Is Not Yet Good Enough. The suffering goes on, and at high levels—and Gay Pride should be seen as an aspiration, not a settled accomplishment. . . .

David Valentine encourages us to see that perhaps the core problem with the mainstream LGBTQ national movement is that its adherents suppress the actual intricacy of lived experience, downplaying the frequency with which our lives fail to slip easily into established, middle-class identity categories. From that perspective “Gay Pride” translates into the false assumption that the categories we employ to describe ourselves are accurate, stable reflections of our experience and further, that their rigid usage removes from consideration the host of incoherent impulses and maverick fantasies that separates individuals—not to mention the barrier it creates to expressing class and racial sub-cultural variations. We’re deceived into believing that labels like “gay” are something more than towers of sand. In truth we—all of us—are profoundly weird—or, to use the latest, more universalizing, category, profoundly queer.

Slaves on the Silk Road
Corresponding with Ray Johnson