by Hadar Aviram, author of Cheap on Crime: Recession-Era Politics and the Transformation of American Punishment

What are the major changes in criminal justice since the Great Recession of 2008?

For the last forty years, the American correctional system has been a growing—and costly—machine involving 2.3 million lives behind bars and millions more under correctional s upervision. But in the late 2000s, around the time of the Great Recession, some things started to change. 2009 was the first year, after decades of growth, that saw the national incarceration rates decline. In some ways, nothing much has happened: not all states reduced their incarceration rates and we still have a long way to go. But several states have reformed their sentencing regime, several have abolished the death penalty or introduced moratoria on its application, and several states have started rethinking the war on drugs by legalizing recreational marijuana. In Cheap on Crime, I examine the new conversation around these reforms in the aftermath of the financial crisis and identify four main features of this new discourse: heavy reliance on bipartisan arguments surrounding costs and savings, the creations of new, bipartisan coalitions advocating financial prudence, the search for new practices for savings in both the public and private correctional sector, and a change in our attitude toward inmates, from wards of the states to consumers of products or burdens on the economy.

What are the advantages and drawbacks of relying on cost and savings as a catalyst for reform?

One advantage is obvious: the cost conversation has broken the impasse between tough­-on-­crime conservatives and human rights advocates by introducing a rationale that everyone can relate to, which has led to some progress on issues that had been stuck for many years. The Achilles heel of the cost conversation is that it is possible to maintain a criminal justice system that is “tough ‘n’ cheap,” and that savings also mean serious cuts to rehabilitation and re-entry programs. The other serious concern is that savings-­related correctional reform can be reversed as the economy improves, which I argue is more likely in some areas (like incarceration rates, privatization, and out-of-state incarceration) than in others (death penalty abolition, drug decriminalization/legalization.)

Where should we go from here?

The worst of the recession is behind us and the economy is improving, and it would make sense to retool our conversation about savings from a reliance on emergency measures and cuts to thinking about the need for returns on investment. Long­-term savings on incarceration should include the closing of the revolving prison door, especially where disempowered and disenfranchised communities are involved. This requires prisons that are actually equipped for—and incentivized to provide—rehabilitation and a robust reentry network for formerly incarcerated people. Since prison has proven a failure in crime prevention, we need to provide it where it matters—in the community—and only then will we truly realize the potential, tangible and intangible, of investing in effective and humane corrections.

Hadar Aviram is Professor of Law at University of California, Hastings College of the Law, where she co-directs the Hastings Institute for Criminal Justice and publishes the California Correctional Crisis blog. She lives in San Francisco. 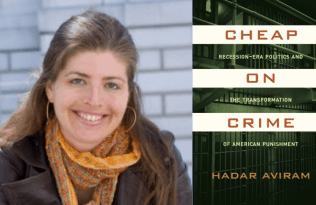