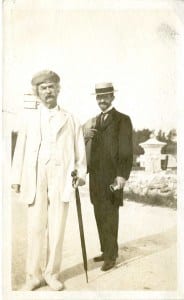 We all know that Mark Twain was no stranger to having his books banned through his life. Back in July, Newsweek printed this excerpt (which will appear in the second volume of the Autobiography of Mark Twain) of Mark Twain confronting a librarian who had banned one of his books.
We’ll be giving away a free galley of the first volume of the Autobiography to someone who can tell us which books of Twain’s have been most commonly banned banned over the years. If you think you know, just send the answer to via either the thisismarktwain twitter feed or email to entries@ucpress.edu by noon, pst, on Wednesday, September 29 and you’ll be entered to win. One lucky person drawn from the correct entries will be chosen and the winner notified. Good luck.

So What’s Wrong with the MDGs?
The Other Crime that Dare Not Speak Its Name

Concerning pubdates, release dates, and when in Sam Hill can I just buy the darn thing?