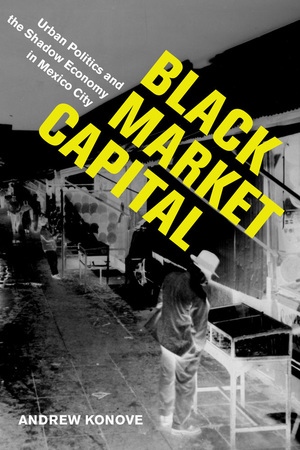 The pandemic has created major supply chain challenges for publishers, manufacturers, warehousing facilities and shipping companies. Please allow for a minimum of 15 business days to receive your order. If you need your order sooner, consider purchasing from one of our retail partner links in the buying options. Thank you!

In this extraordinary new book, Andrew Konove traces the history of illicit commerce in Mexico City from the seventeenth century to the twentieth, showing how it became central to the economic and political life of the city. The story centers on the untold history of the Baratillo, the city’s infamous thieves’ market. Originating in the colonial-era Plaza Mayor, the Baratillo moved to the neighborhood of Tepito in the early twentieth century, where it grew into one of the world’s largest emporiums for black-market goods. Konove uncovers the far-reaching ties between vendors in the Baratillo and political and mercantile elites in Mexico City, revealing the surprising clout of vendors who trafficked in the shadow economy and the diverse individuals who benefited from their trade.

This post is published in conjunction with the Latin American Studies Association congress in Barcelona. Check for other posts from the conference. #LASA2018 by Andrew Konove, author of Black Market Capital: Urban Politics and the Shadow Economy …

Just in Time for LASA: Save 40% and Explore Our Author Sessions

Attending this year’s Latin American Studies Association congress in Barcelona? Save 40% on new and bestselling titles in the field on our website with promo code 17E4899. Additionally, keep scrolling to check out …

Andrew Konove is Assistant Professor of History at the University of Texas at San Antonio.

"In this study of ‘illicit commerce’ in Mexico City between the seventeenth and twentieth centuries, Konove focuses on the development and functioning of Baratillo, ‘the city’s infamous thieves’ market’. He claims that the vendors in this market have long enjoyed ties with the capital’s political and mercantile elites."—Survival: Global Politics and Strategy

"Black Market Capital offers a number of contributions to our understanding of urban life in Mexico. . . . challenges some commonly held historical interpretations of Mexican and Latin American history."—Journal of Interdisciplinary History

"In this engaging and important book, Konove analyzes and historicizes the significance of the Baratillo, a street marketplace whose history spans back to the pre-Columbian past. . . . Black Market Capital is a significant and creative contribution to the growing historiography on crime in Mexico. While historians engage the importance of place, Konove makes the public market, a few side streets, and its stalls central to modern Mexican political, social, and economic history."—Hispanic American Historical Review

"This broad-ranging study examines a commercial space that many saw as marginal but that has, in fact, played a central role in the economy of Mexico City since the colonial period. Andrew Konove shows how the Baratillo market survived as a key place of social interaction during four centuries of urban history. Rather than a story of segregation, resistance, or clientelism, Black Market Capital tells the story of sellers and customers who were often outside the law yet managed to shape urban regulations, republican politics, and public life."—Pablo Piccato, author of A History of Infamy: Crime, Truth and Justice in Mexico


"Black Market Capital is the first full scholarly study of a critical topic in the history of Mexico, and it will certainly be the go-to text for any study of urban social and economic life. It provides a close-focus view of what is arguably the central social institution in the life of Mexico City: the popular marketplace, in general, and Mexico City’s most (in)famous marketplace, the Baratillo, in particular. Konove ably demonstrates that the market was at the very center of the city’s economic life—the beating heart of petty commercial activity—and, at the same time, was a highly politicized space, where different views about state-building, ideologies of commerce, and the rights of citizenship were debated and negotiated."—Edward Beatty, author of Technology and the Search for Progress in Modern Mexico
Read More >

Beyond the Walled City

This City Belongs to You

A History of Infamy

Sexuality and the Unnatural in Colonial Latin America

While the City Sleeps

Death in the City