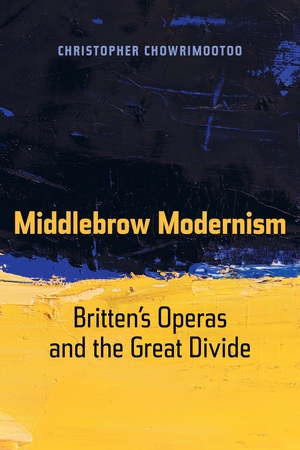 Situated at the intersections of twentieth-century music history, historiography, and aesthetics, Middlebrow Modernism uses Benjamin Britten’s operas to illustrate the ways in which composers, critics, and audiences mediated the “great divide” between modernism and mass culture. Reviving mid-century discussions of the middlebrow, Christopher Chowrimootoo demonstrates how Britten’s works allowed audiences to have their modernist cake and eat it: to revel in the pleasures of consonance, lyricism, and theatrical spectacle even while enjoying the prestige that came from rejecting them. By focusing on moments when reigning aesthetic oppositions and hierarchies threatened to collapse, this study offers a powerful model for recovering shades of grey in the traditionally black-and-white historiographies of twentieth-century music.

This guest post is published as part of our blog series related to the American Musicological Society conference from November 1–4 in San Antonio.  By Christopher Chowrimootoo, author of Middlebrow Modernism: Britten’s Operas and …

Christopher Chowrimootoo is Assistant Professor in the Program of Liberal Studies and in the Department of Music at the University of Notre Dame.

“…an insightful study on the elusive concept of the middlebrow in the critical reception of Benjamin Britten’s stage works. … Importantly, Chowrimootoo confronts the ambiguities inherent in conceptions of the middlebrow, yet he does not seek to resolve them. Instead, he accepts that Britten identified as both a composer who valued accessibility and public service, and as one who advocated for the serious study and interpretation of his music.”—North American British Music Studies Association Reviews

"Ranging widely across literary, theatrical, musical, and religious debates, Christopher Chowrimootoo painstakingly traces how modernist values were negotiated in everyday critical practice, revealing how they unraveled in the very act of articulation. In the process, he offers sophisticated and compelling new readings of Britten’s operas, showing us how they register twentieth-century art’s paradoxical position in a market-driven society."—Heather Wiebe, author of Britten’s Unquiet Pasts: Sound and Memory in Postwar Reconstruction

"Arnold Schoenberg may have claimed that the middle road is the only one that doesn’t lead to Rome, but Christopher Chowrimootoo’s exhaustively researched and elegantly written study proves otherwise. Deftly navigating between the entrenched oppositions of the Great Divide, he charts a course to the ambivalent heart of postwar modernism, inviting us to listen anew to its obfuscations and disavowals and offering along the way provocative reinterpretations not just of Britten’s operas, but of a range of figures from Sibelius to Boulez."—Arman Schwartz, author of Puccini’s Soundscapes: Realism and Modernity in Italian Opera


"With Middlebrow Modernism, the concept of the middlebrow has finally arrived on the musicological scene—and arrived it has! No mere primer, Chowrimootoo's provocative monograph reads between the lines of historical criticism to tease out the middlebrow's wide-ranging ambivalence and contradictions with unparalleled sophistication and depth. More than this, it inaugurates a middlebrow methodology, mediating nimbly between composition and criticism, and between aesthetic and social considerations. A must-read for anyone with interests in twentieth-century cultural history writ large."—Kate Guthrie, Lecturer in Music, University of Bristol

"A real feat. In a virtuoso deconstruction, Chowrimootoo shows that middlebrow modernism is anything but peripheral. It’s right there, at the center of the musical story, holding sway and holding court, trying and getting tried. At the same time, this middlebrow center gets teased apart, becoming anything, and anywhere, but middle—an endless agon, a labyrinth of disagreements, a roiling concentrate of modernism itself. All the while, the swift prose is a pleasure, the intelligence crackling, the capacious readings of Britten’s operas indispensable."—Seth Brodsky, author of From 1989, or European Music and the Modernist Unconscious
Read More >

List of Illustrations
Acknowledgments
1. Middlebrow Modernism
2. Sentimentality under Erasure in Peter Grimes
3. The Timely Traditions of Albert Herring
4. The Turn of the Screw, or: The Gothic Melodrama of Modernism
5. The Burning Fiery Furnace and the Redemption of Religious Kitsch
6. Death in Venice and the Aesthetics of Sublimation