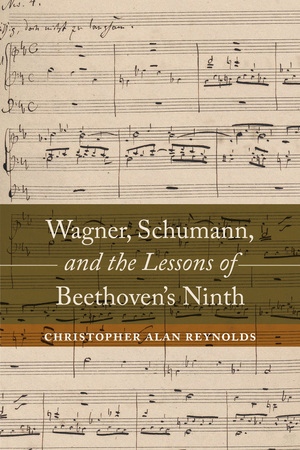 In this original study, Christopher Alan Reynolds examines the influence of Beethoven’s Ninth Symphony on two major nineteenth-century composers, Richard Wagner and Robert Schumann. During 1845–46 the compositional styles of Schumann and Wagner changed in a common direction, toward a style that was more contrapuntal, more densely motivic, and engaged in processes of thematic transformation. Reynolds shows that the stylistic advances that both composers made in Dresden in 1845–46 stemmed from a deepened understanding of Beethoven’s techniques and strategies in the Ninth Symphony. The evidence provided by their compositions from this pivotal year and the surrounding years suggests that they discussed Beethoven’s Ninth with each other in the months leading up to the performance of this work, which Wagner conducted on Palm Sunday in 1846. Two primary aspects that appear to have interested them both are Beethoven’s use of counterpoint involving contrary motion and his gradual development of the “Ode to Joy” melody through the preceding movements. Combining a novel examination of the historical record with careful readings of the music, Reynolds adds further layers to this argument, speculating that Wagner and Schumann may not have come to these discoveries entirely independently of each other. The trail of influences that Reynolds explores extends back to the music of Bach and ahead to Tristan and Isolde, as well as to Brahms’s First Symphony.

Christopher Alan Reynolds is Professor of Music at University of California, Davis, and author of Papal Patronage and the Music of St. Peter’s, 1380–1513 and Motives for Allusion: Context and Content in Nineteenth-Century Music (which was a finalist for the Otto Kinkeldey Award from the American Musicological Society in 2004). He is a past president of the American Musicological Society.

"Wagner, Schumann, and the Lessons of Beethoven's Ninth is a fascinating new examination... It is as though a careful magnifying glass were held to past interactions between two very different composers..."—Nancy Lorraine The Midwest Book Review

"This is a multilayered book. It is on one level a formidable piece of forensic musical detective work displaying detailed critical understanding of the works in question through identification of influences and tracing of possible thematic cross-references across generic boundaries; on another it is a musically highly intelligent study of interactive compositional processes in the different but related guises of operatic and instrumental music."—Music & Letters

"Once again Christopher Reynolds amazes us with his X-ray ears, this time forging what will surely be a permanent link between Schumann and Wagner, two composers often thought incompatible, not least by themselves. Uncovering their common responses to Beethoven’s Ninth and to the music of Bach, as well as Brahms’s response to the two of them (eager and grateful toward the one, covert and grudging toward the other), he reminds us that composers are alive to all sorts of stimuli but react most tellingly to one another’s music. Reading Reynolds is like borrowing his ears and hearing new resonances in music we thought we knew."—Richard Taruskin, author of The Oxford History of Western Music
"By illuminating the largely unexplored topic of his interactions with Schumann, this book establishes the terms of a fundamental reassessment of Wagner’s development in the 1840s and 50s. Of particular interest are the specific ways in which Wagner, Schumann, and other romantic composers followed the example of Beethoven’s monumental Ninth Symphony. The story of that work’s formative influence has been told many times, but never before with the degree of insight and musical detail that Christopher Reynolds presents here."—Stephen Hinton, Avalon Foundation Professor in the Humanities, Stanford University, and author of Weill's Musical Theater: Stages of Reform


"Music historians have long been aware of two separate stories: one, that Beethoven’s Ninth Symphony exerted tremendous fascination on virtually all later symphonists; the other, that Richard Wagner saw his music drama as the next logical step to be taken after the Ninth. What Christopher Reynolds does in this imaginative and persuasive study is to bring these two stories together and to demonstrate that they are in fact a single story, one that emerged during the fateful 1845–46 meetings between Wagner and Schumann in Dresden."—Karol Berger, author of A Theory of Art and Bach's Cycle, Mozart's Arrow: An Essay on the Origins of Musical Modernity
Read More >