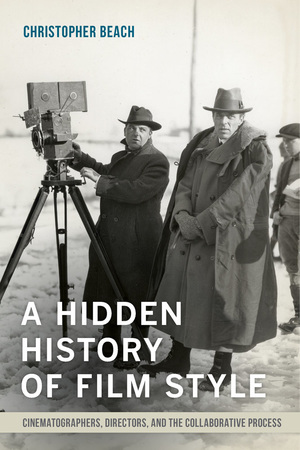 A Hidden History of Film Style Cinematographers, Directors, and the Collaborative Process

The image that appears on the movie screen is the direct and tangible result of the joint efforts of the director and the cinematographer. A Hidden History of Film Style is the first study to focus on the collaborations between directors and cinematographers, a partnership that has played a crucial role in American cinema since the early years of the silent era. Christopher Beach argues that an understanding of the complex director-cinematographer collaboration offers an important model that challenges the pervasive conventional concept of director as auteur. Drawing upon oral histories, early industry trade journals, and other primary materials, Beach examines key innovations like deep focus, color, and digital cinematography, and in doing so produces an exceptionally clear history of the craft. Through analysis of several key collaborations in American cinema from the silent era to the late twentieth century—such as those of D. W. Griffith and Billy Bitzer, William Wyler and Gregg Toland, and Alfred Hitchcock and Robert Burks—this pivotal book underlines the importance of cinematographers to both the development of cinematic technique and the expression of visual style in film.

Christopher Beach is currently a Visiting Assistant Professor at Williams College. He is also the author of Class, Language, and American Film Comedy and The Films of Hal Ashby. He was named one of two Academy Film Scholars by the Academy of Motion Picture Arts and Sciences in 2013.

"Finally, a study that doesn't just pay lip service to film as a collaborative art but that actually reveals the ways in which directors and cinematographers have worked together. Eschewing auteurist mystification, Beach makes technical matters and the filmmaking process crystal clear while expanding our understanding of how canonical films actually were designed and shot."—Sarah Kozloff, author of The Best Years of Our Lives

"Christopher Beach’s A Hidden History of Film Style celebrates Hollywood cinema as a collaborative art. Rejecting the auteur theory’s belief in the primacy of the director, Beach demonstrates that many of the greatest Hollywood directors enjoyed long and productive partnerships with skilled and talented cinematographers. Packed with richly detailed case studies, the book shows how new technologies and new ideas about cinema as a visual art have shaped a wide range of classics, from Double Indemnity and Rear Window to JFK and Saving Private Ryan."—Patrick Keating, author of Hollywood Lighting from the Silent Era to Film Noir

"Christopher Beach’s breakthrough book stands alongside Patrick Keating’s Hollywood Lighting as a foundational work in the study of Hollywood cinematography. In his well-chosen case studies, Beach encourage us to fundamentally rethink film authorship, film style, and the creative chemistry between director and cinematographer on a remarkable range of Hollywood films, from the silent era to the digital age."—Thomas Schatz, author of The Genius of the System