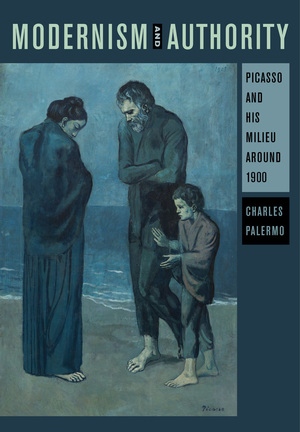 Modernism and Authority Picasso and His Milieu around 1900

Modernism and Authority presents a provocative new take on the early paintings of Pablo Picasso and the writings of Guillaume Apollinaire. Charles Palermo argues that references to theology and traditional Christian iconography in the works of Picasso and Apollinaire are not mere symbolic gestures; rather, they are complex responses to the symbolist art and poetry of figures important to them, including Paul Gauguin, Charles Morice, and Santiago Rusiñol. The young Picasso and his contemporaries experienced the challenges of modernity as an attempt to reflect on the lost relation to authority. For the symbolists, art held authority by revealing something compelling—something to which audiences must respond lest they lose claim to their own moral authority. Instead of the total transformation of the reader or viewer that symbolist creators envision, Picasso and Apollinaire imagine a divided self, responding only partially or ambivalently to the work of art’s call. Navigating these problems of symbolist art and poetry entails considering the nature of the work of art and of one’s response to it, the modern subject’s place in history, and the relevance of historical truth to our methodological choices in the present.

The New York Times reported “a medley of whoops, hollers and gasps” when the gavel came down on Pablo Picasso’s Les Femmes d’Alger (Version O, 1955) at Christie’s Monday evening. At a …

Charles Palermo is Associate Professor of Art History at the College of William and Mary. He is the author of Fixed Ecstasy: Joan Miró in the 1920s.

"Charles Palermo's Modernism and Authority pursues a wholly new approach to early Picasso (and to Apollinaire, among other fascinating figures) by exploring with exceptional brilliance, learning, and sophistication a set of theoretical and indeed theological issues that he demonstrates were at the forefront of serious thinking, writing, and art making in the late nineteenth and early twentieth centuries. It's a stunning achievement, one that sets a new standard for interpretive work on the period, and not only in the history of art." —Michael Fried, Johns Hopkins University

"Do we need to understand Pope Pius X in order to understand Apollinaire and Picasso? This extraordinary book says yes, and brilliantly shows how the crisis of authority produced by Catholic modernism contributed to the crisis of authority that produced the very different modernism of the French poet and the Spanish painter. The readings of Apollinaire are amazing; the readings of certain crucial early Picassos alter forever one’s sense of what is at stake in those paintings." —Walter Benn Michaels, author of The Beauty of a Social Problem: Photography, Autonomy, Economy

"Although focused on a select group of writers and painters and a brief moment in history, this book addresses the much larger issue of modernism’s crisis of authority (i.e., art’s ability, in the absence of a given tradition, to compel conviction). Palermo’s nuanced discussions of individual works reveal a surprising number of parallels with and references to contemporaneous debates within the Catholic Church. If I was initially skeptical of the theological dimension of his project, I have since been converted—such is the marvelous authority of Palermo’s text." —Lisa Florman, Ohio State University

PART 2: “A FORM OF SOUND WORDS”
3. Running in the Streets, Wandering in the Vatican

PART 3: “YOU YOURSELF, MAYBE YOU WILL NOT DIE”
4. Wandering the Earth, Running from the Truth
5. Holy Families