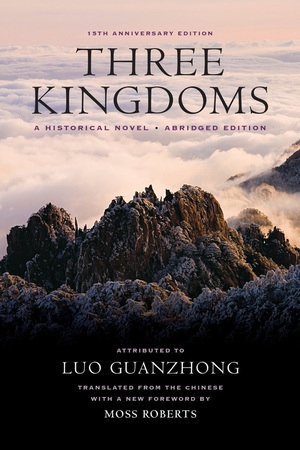 Updated with a new foreword by Moss Roberts for this fifteenth anniversary edition, Three Kingdoms tells the story of the fateful last reign of the Han dynasty (206 B.C.–A.D. 220), when the Chinese empire was divided into three warring kingdoms. Writing some twelve hundred years later, the Ming author Luo Guanzhong drew on histories, dramas, and poems portraying the crisis to fashion a sophisticated, compelling narrative that has become the Chinese national epic. This abridged edition captures the novel's intimate and unsparing view of how power is wielded, how diplomacy is conducted, and how wars are planned and fought. As important for Chinese culture as the Homeric epics have been for the West, this Ming dynasty masterpiece continues to be widely influential in China, Korea, Japan, and Vietnam and remains a great work of world literature.

Moss Roberts is Professor of Chinese at New York University. He translated Dao De Jing (California, 2004) and an unabridged edition of Three Kingdoms (California, 1991) and is the translator and editor of Chinese Fairy Tales and Fantasies (1979).

"Three Kingdoms gives us the Iliad of China. First of the five great works of traditional prose fiction, this master narrative transforms history into epic and has thereby educated and entertained readers of five centuries with unforgettable exemplars of martial and civic virtue, of personal fidelity and political treachery. Moss Roberts's translation is of surpassing excellence and impeccable scholarship. It should delight and captivate Western readers for many years to come."—Anthony C. Yu, University of Chicago


"Moss Roberts's elegant and powerful translation of China's most important historical romance has a stunning directness that aptly conveys the dramatic boldness of the original episodic narrative. English readers may now finally understand why this 15th-century novel so strategically shaped the political worldview of generations of Chinese."—Frederic Wakeman, University of California, Berkeley

"A superb new translation. The style is excellent: lively, natural dialogue; vigorous prose in battle descriptions; dignified phrasing where called for. This translation is no less than classic."—Cyril Birch, University of California, Berkeley

Preface to the Abridged Edition xiii

Acknowledgements to the Unabridged Edition xv

Foreword to the Unabridged Edition by John S. Service xix