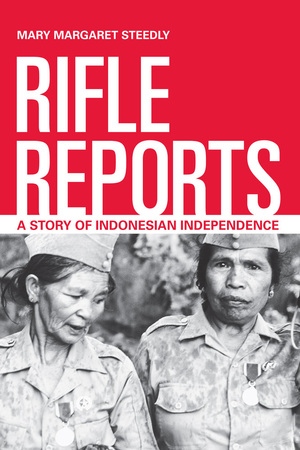 Independence - politieke onafhankelijkheid, political independence - is no more and no less than a golden bridge, and after we have crossed that bridge we will perfect our society.
-Sukarno

The image of independence as a golden bridge to the future can be found several times in Sukarno's political writings. It first appeared in his 1933 speech "Mentjapai Indonesia Merdeka" (Achieving an Independent Indonesia), quoted in the epigraph above, but nowhere was it more significant than in his famous "Birth of the Pancasila" speech, of June 1, 1945. Speaking to a committee of Japanese officials, Javanese aristocrats, and elite nationalist politicians who had been convened to explore the possibility of Indonesian national independence, he argued that political independence must precede rather than follow from the resolution of such "petty issues" as the nature and organization of state authority, the intellectual and physical readiness of the population for self-rule, and the general level of social welfare throughout the archipelago. These were matters that could be properly dealt with only after political independence had been achieved. "If every one of the seventy million Indonesian people [orang Indonesia] has to be independent in their hearts before we can achieve political independence [English in original], I say again, we will not get an independent Indonesia before the Day of Judgment! ... It doesn't matter if the people [rakyat] can read or not, it doesn't matter if the economy is strong or not, it doesn't matter if the people are ignorant or clever, as

On August 17, 1945, Indonesia proclaimed its independence from Dutch colonial rule. Five years later, the Republic of Indonesia was recognized as a unified, sovereign state. The period in between was a time of aspiration, mobilization, and violence, in which nationalists fought to expel the Dutch while also trying to come to grips with the meaning of “independence.” Rifle Reports is an ethnographic history of this extraordinary time as it was experienced on the outskirts of the nation among Karo Batak villagers in the rural highlands of North Sumatra. Based on extensive interviews and conversations with Karo veterans, Rifle Reports interweaves personal and family memories, songs and stories, memoirs and local histories, photographs and monuments, to trace the variously tangled and perhaps incompletely understood ways that Karo women and men contributed to the founding of the Indonesian nation. The routes they followed are divergent, difficult, sometimes wavering, and rarely obvious, but they are clearly marked with the signs of gender. This innovative historical study of nationalism and decolonization is an anthropological exploration of the gendering of wartime experience, as well as an inquiry into the work of storytelling as memory practice and ethnographic genre.

Mary Steedly is Professor of Anthropology at Harvard University and the author of Hanging without a Rope: Narrative Experience in Colonial and Postcolonial Karoland.

"Fascinating ... Mary Steedly moves away from the conventional narrative histories of the period, which have generally reflected the perspective of male revolutionaries and leaders, to a more deeply textured portrayal of the experiences of ordinary people during the independence struggle."—Audrey Kahin Indonesia

“Steedly’s project is not just to read history against the grain, but to significantly interrupt the national history of Indonesia, with fragments of remembered pasts from what she calls the outskirts of the nation. Her narrative opens to the complexity of the past and brings us to a place where the granularity of detail is left to generate multiple puzzlements. Rifle Reports reflects upon material experiences of the past refracted across remembered stories in a precise and telling manner that reveals the authorized history of the nation to be just one of those stories.”—Nancy Florida, University of Michigan

Introduction: The Outskirts of the Nation

Conclusion: The Sense of an Ending