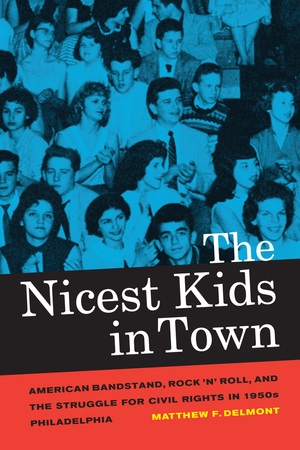 The Nicest Kids in Town American Bandstand, Rock 'n' Roll, and the Struggle for Civil Rights in 1950s Philadelphia

American Bandstand, one of the most popular television shows ever, broadcast from Philadelphia in the late fifties, a time when that city had become a battleground for civil rights. Counter to host Dick Clark’s claims that he integrated American Bandstand, this book reveals how the first national television program directed at teens discriminated against black youth during its early years and how black teens and civil rights advocates protested this discrimination. Matthew F. Delmont brings together major themes in American history—civil rights, rock and roll, television, and the emergence of a youth culture—as he tells how white families around American Bandstand’s studio mobilized to maintain all-white neighborhoods and how local school officials reinforced segregation long after Brown vs. Board of Education. The Nicest Kids in Town powerfully illustrates how national issues and history have their roots in local situations, and how nostalgic representations of the past, like the musical film Hairspray, based on the American Bandstand era, can work as impediments to progress in the present.

“Well-researched, tightly-written. . . . Delmont paints an impressively bright, clear, and comprehensive picture of the institutional and structural factors that made segregation what it was in Philadelphia.”—History News Network

“Excellent. . . . Offers a valuable understanding of the role of myths, American Bandstand, and the melding of African Americans into the national youth culture.”—Choice

“The study illustrates how . . . nostalgic representations of the past . . . can work as impediments to progress in the present.”—Cbq Communication Booknotes Qtly

“Although the story of Bandstand has been told before, it is Delmont’s documentation of Bandstand’s resistance to integration, and black Philadelphians’ subsequent counter-resistance to Bandstand, that distinguishes his account. . . . The Nicest Kids in Town counters the (false) mythology of American Bandstand with valuable descriptions of ‘forgotten’ cultural productions.”—Gayle Wald, George Washington University Jrnl Of The Society For American Music (Jsam)

“Delmont set out to write about how the '50s dance show "American Bandstand" was an integrated bastion of pop culture, where Philadelphia's black and white teens mixed and mingled on television even though the rest of the country was bitterly divided by race. Then he discovered his entire premise was dead-wrong. In the resulting book, The Nicest Kids in Town, [Delmont] details how "American Bandstand" kept African-American teens off the show, despite host Dick Clark's later claims to the contrary.”—Philadelphia Daily News

“By challenging Dick Clark’s claim that he helped integrate American popular music and culture, Matthew Delmont puts the lie to Clark’s air-brushed history of American Bandstand’s role in racial desegregation. The Nicest Kids in Town shows how the nexus of sound, place, race, and space operated together to create and reinforce a myth of national memory and belonging. Just as importantly, this compelling cultural history demonstrates the importance of the youth market as a theater of struggle where brave young men and women—outraged by the discrimination and racism they faced for the simple act of enjoying music—refused to have their bodies, tastes, or desires policed. Delmont shows how the music moved them, and how in turn they moved the music onto television screens across America.”—Herman Gray, author of Cultural Moves.

“The Nicest Kids in Town speaks simultaneously to several significant current lines of inquiry among historians of the United States after World War II. Delmont takes on issues that we thought we already knew completely—the social and cultural history of the 1950s and ‘60s, the Civil Rights movement, the birth of television—but he brings original material to his story and connects these issues in new ways. Delmont’s work proves him to be a talented, careful, and thorough scholar, and in a large body of work on these topics, his book stands alone.”—Jay Mechling, author of On My Honor: Boy Scouts and the Making of American Youth.

2. They Shall Be Heard
Local Television as a Civil Rights Battleground

5. The Rise of Rock and Roll in Philadelphia
Georgie Woods, Mitch Thomas, and Dick Clark

8. Still Boppin’ on Bandstand
American Dreams, Hairspray, and American Bandstand in the 2000s

Conclusion
Everybody Knows about American Bandstand