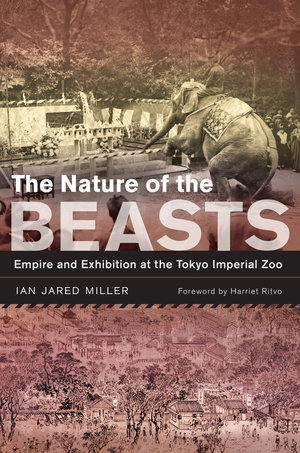 It is widely known that such Western institutions as the museum, the university, and the penitentiary shaped Japan’s emergence as a modern nation-state. Less commonly recognized is the role played by the distinctly hybrid institution—at once museum, laboratory, and prison—of the zoological garden. In this eye-opening study of Japan’s first modern zoo, Tokyo’s Ueno Imperial Zoological Gardens, opened in 1882, Ian Jared Miller offers a refreshingly unconventional narrative of Japan’s rapid modernization and changing relationship with the natural world. As the first zoological garden in the world not built under the sway of a Western imperial regime, the Ueno Zoo served not only as a staple attraction in the nation’s capital—an institutional marker of national accomplishment—but also as a site for the propagation of a new “natural” order that was scientifically verifiable and evolutionarily foreordained. As the Japanese empire grew, Ueno became one of the primary sites of imperialist spectacle, a microcosm of the empire that could be traveled in the course of a single day. The meaning of the zoo would change over the course of Imperial Japan’s unraveling and subsequent Allied occupation. Today it remains one of Japan’s most frequently visited places. But instead of empire in its classic political sense, it now bespeaks the ambivalent dominion of the human species over the natural environment, harkening back to its imperial roots even as it asks us to question our exploitation of the planet’s resources.

"The Nature of the Beasts is a model of interdisciplinary environmental history and a must-read for anyone interested in the politics of the modern zoo."—Enviromental History

"A rich political and cultural history of modern Japan."—Cross-Currents

"Makes an important contribution to our understanding of how governments outside of the United States and Europe have used zoo animals to further political goals."—American Historical Review

"The Nature of Beasts is a critical intervention in global zoo, environmental and Japanese histories. It stands on its own as a fascinating and thoughtful history, but also provides opportunities for future scholarly exploration into patterns of human dominion over nature across the East Asian world."—Pacific Affairs

"This is a path-breaking contribution to the history of science, environmental history, and Japanese history."—Journal of Japanese Studies

“The book provides a rich canvas for a variety of cross-cultural comparisons.”—Monumenta Nipponica

"Brilliantly researched and refreshingly original, this study of the Ueno Zoo shows how the human world has been constituted in large part by its engagements with nature and animals—and, conversely, how the zoo reflects larger questions of modernity, desire, violence, and history. Nationalism, empire and colonialism, total war, consumerism, and the culture of capitalism, bio-power and necropolitics, race—readers will be challenged to think about these and other "human" concerns through the supposed garden of nature and animals." —Takashi Fujitani, Dr. David Chu Professor and Director in Asia Pacific Studies, University of Toronto

"In a tumultuous history of the Tokyo Zoo as it has been intertwined with the history of the Japanese nation, Ian Miller reveals the zoo as a site for disciplining subjects and citizens, naturalizing empire, glorifying sacrifice during war, playing out geopolitical rivalries, and spurring mass consumerism. Theoretically sophisticated but accessible and thoroughly engaging, The Nature of the Beasts is an important contribution to our understandings of Japan’s modernization, imperialism, and relationship with the animal world."—William M. Tsutsui, author of Japanese Popular Culture and Globalization

"The Nature of the Beasts is at once critical, compassionate and profound. The Ueno zoo becomes a stage on which animals, people and nations act out the changing ecological drama of modernity. It is a drama in which we all play a part. We are touched with sorrow by the ritualized sacrifice of majestic animals played out in the culture of total war. This book is a deep reflection on the rise, fall, and transformation of an imperial power and its consequences for the lives of humans and nonhumans alike."—Gregg Mitman, author of Reel Nature: America's Romance with Wildlife on Film

"Ian Miller's compelling book on Japan's foremost zoo makes clear that the cages constructed for nonhuman animals ultimately circumscribe their human captors as well. Japan's modern history, its rise and fall as an imperial power and its postwar place in a world threatened by climate change, are all encapsulated in dramatic events at the Ueno zoological garden."—Julia Adeney Thomas, author of Reconfiguring Modernity: Concepts of Nature in Japanese Political Ideology

I. Animals in the Anthropocene
II. Ecological Modernity in Japan
III. The Natural World as Exhibition

PART ONE
The Nature of Civilization

CHAPTER ONE:
Japan’s Animal Kingdom: The Origins of Ecological Modernity and the Birth of the Zoo

I. Bringing Politics to Life
II. Sorting Animals Out in Meiji Japan
III. Animals in the Exhibitionary Complex
IV. The Ueno Zoo
V. Ishikawa Chiyomatsu and the Evolution of Exhibition
VI. Bigot’s Japan

CHAPTER TWO:
The Dreamlife of Imperialism: Commerce, Conquest, and the Naturalization of Ecological Modernity

I. The Dreamlife of Empire
II. The Nature of Empire
III. Nature Behind Glass
IV. Backstage at the Zoo
V. The Illusion of Liberty
VI. Imperial Trophies
VII. Imperial Nature

CHAPTER THREE:
Military Animals: The Zoological Gardens and the Culture of Total War

I. Tokyo, 1943
II. A Strange Sort of Ceremony
III. Mass-Mediated Sacrifice
IV. The Taxonomy of a Massacre
V. The Killing Floor
VI. And Then There Were Two

CHAPTER FIVE:
The Children’s Zoo: Elephant Ambassadors and Other Creatures of the Allied Occupation

CHAPTER SIX:
Pandas in the Anthropocene: Japan’s “Panda Boom” and the Limits of Ecological Modernity

EPILOGUE:
The Sorrows of Ecological Modernity