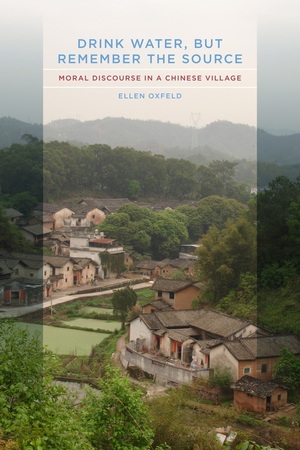 Drink Water, but Remember the Source Moral Discourse in a Chinese Village

While many have studied China’s recent rise as an economic power, China itself does not exist solely in the economic realm. Ordinary Chinese still place intense value on moral obligations and the nature of the social ties that connect them to others. This study explores the moral sphere as a key to understanding how rural Chinese experience and talk about their lives in this period of rapid economic transformation. Ellen Oxfeld, who spent time in a village in southeast China’s Guangdong Province over the course of a decade and a half, examines both continuities and changes in the local culture. Although some have suggested that the reform period in China has been characterized by moral cynicism, Oxfeld finds that villagers appeal to a vibrant array of moral discourses when choosing a path of personal action or evaluating the behavior of others.

Ellen Oxfeld is Professor of Anthropology at Middlebury College. She is the author of Blood, Sweat, and Mahjong: Family and Enterprise in an Overseas Chinese Community and the coeditor of Coming Home? Immigrants, Refugees, and Those Who Stayed Behind.

“Original and important contribution to the fast-growing literature on contemporary China as well as to the anthropology of morality. . . . Two thumbs up!”—Journal Of China Quarterly

“Stories from a single village are told with care and compassion, allowing Oxfeld to develop a nuanced analysis of moral discussions in rural China.”—Asia Pacific World

“Drink Water, But Remember the Source makes a significant contribution to the anthropology of morality, both in a general sense and in the context of the rapid socio–cultural changes of Reform­era China.”—David A. Palmer The China Journal

“[Oxfeld] provides an important and insightful view into how people construct and live morality in a time of fundamental change and challenge.”—Ellen R. Judd Journal Of Interdisciplinary History

"Drink Water, But Remember the Source is a lively and readable ethnography that will reshape our understanding of moral discourse in the Chinese countryside. Oxfeld greatly improves upon the usual claims that China is losing all forms of communal morality by illustrating the multiplicity of views refracted through concrete events."—Robert P. Weller, Boston University
Read More >

Part I. Morality in Rural China: Contexts and Categories