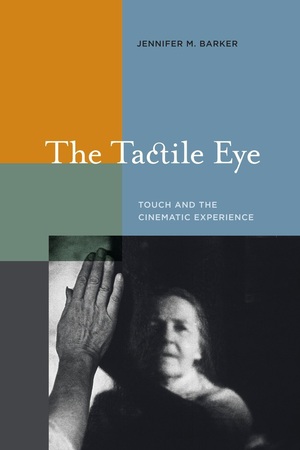 The Tactile Eye Touch and the Cinematic Experience

The Tactile Eye expands on phenomenological analysis and film theory in its accessible and beautifully written exploration of the visceral connection between films and their viewers. Jennifer M. Barker argues that the experience of cinema can be understood as deeply tactile—a sensuous exchange between film and viewer that goes beyond the visual and aural, gets beneath the skin, and reverberates in the body. Barker combines analysis of embodiment and phenomenological film theory to provide an expansive description of cinematic tactility. She considers feminist experimental film, early cinema, animation, and horror, as well as classic, modernist, and postmodern cinema; films from ten national cinemas; and work by Chuck Jones, Buster Keaton, the Quay Brothers, Satyajit Ray, Carolee Schneemann, and Tom Tykwer, among others.

“The Tactile Eye brings the cinematic experience to the emergence and convergence of our and the film’s bodies.”—Anthropological Notebooks

"With her provocative focus on the tactile dimensions of cinema, Jennifer Barker crucially contributes to a reinvigoration of film theoretical debates. This book is a must-read not only for those interested in the interface between cinema and the body, but for anyone who believes in cinema's endless capacity to surprise us."—Elena del Río, author of Deleuze and the Cinemas of Performance: Powers of Affection

"The Tactile Eye makes an important contribution to the recent discourses of embodiment in cinema and cultural studies. Grounded in existential phenomenology, the book abounds with productive suggestions, and precise analytical tools, with which one might carry out a deeply tactile ("textural") analysis of cinema."—Laura U. Marks, author of Touch: Sensuous Theory and Multisensory Media

2. Musculature
Through a Glass Deftly
Empathy
Here and There
A Tenuous Grasp
Apprehension