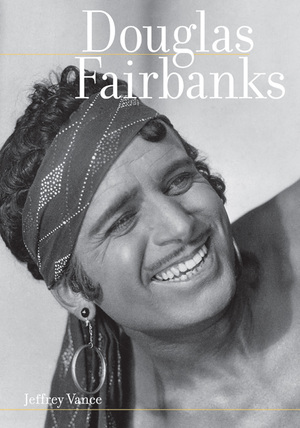 This deft amalgam of biography, film history, and analysis is a superb portrait of a true pioneer who was critically important to the creation of cinema as the defining art form of the twentieth century. Douglas Fairbanks (1883-1939) was one of the first film superstars, a screenwriter, a major independent producer during the early studio era, a cofounder of United Artists, a founder and the first president of the Academy of Motion Picture Arts and Sciences, and much more. The optimism, energy, and huge success during the 1920s of his best-remembered films The Mark of Zorro, Douglas Fairbanks in Robin Hood, The Thief of Bagdad, and The Black Pirate made Fairbanks a popular hero throughout the world and showcased his talents as a creative producer whose work set the standard for excellence.

Douglas Fairbanks takes the full measure of Fairbanks's remarkable life. Jeffrey Vance, who had complete access to the star's personal and professional papers and scrapbooks, also incorporates 237 photographs, some unseen for more than seventy-five years. Extensively researched, engagingly written, and sumptuously designed, the book goes behind Fairbanks's public persona to thoroughly explore his art and his far-reaching influence.

Jeffrey Vance is a film historian, producer, and lecturer as well as the author of an acclaimed trilogy of books on the great triumvirate of silent-film comedy: Chaplin: Genius of the Cinema, Harold Lloyd: Master Comedian (with Suzanne Lloyd), and Buster Keaton Remembered (with Eleanor Keaton).

“Lavishly illustrated, Vance's painstakingly researched, comprehensive and thoughtful work is a book for buffs to treasure . . . Every film star of worth should have so gifted a biographer as Vance . . . a riveting read.”—Bill Thompson Charleston Post & Courier

“A beautiful book, extensively researched, a model of film scholarship, one of the best cinema studies of this or any year.”—John Gallagher Nat’l Board Of Review Of Motion Pictures

“Exudes the lively, breezy personality of the swashbuckling Fairbanks. Vance imbues this biography with the life, vitality, and verve of the popular, energetic celebrity. . . . The research is impeccable, the writing engaging and illuminating, and the deluxe illustrations exquisite.”—T. Lindvall Choice

“Looks at the mad life and times of one of cinema’s first superstars . . . brings a lot of freshness to the Fairbanks biography.”—Paul Dale The List

“A sumptuous volume with all the elements of a coffee table work but also with a first-rate text. . . . Jeffrey Vance's book will obviously serve as the definitive work on its subject.”—Anthony Slide Theslidearea.com

“Jeffrey Vance’s glorified, and glorifying, picture book retrieves the memory and the glamour of one of the first superstars.”—Frederic Raphael Times Literary Supplement (TLS)

“Fairbanks made the movies an avenue to another life and made the concept of a star larger than life. Vance provides a fitting tribute to such an icon, letting the die-hard fan know Fairbanks is not forgotten, and introducing him to the modern movie fan who—before this book—may not have understood the origin of so much of what is loved today.”—Deborah Ground Buckner A ‘N‘ E Vibe

“This is scholarship without tedium; it is a joy to read and an assessment long overdue.”—Gordon Thomas Bright Lights Film Journal

“The book is an absolute must for any cinema buff.”—Broadway Stars

“Douglas Fairbanks is without doubt a serious biography of one of the pioneers of cinema, but it’s also the history of an industry that, even then, crossed the frontiers of states and continents like no other artform to unite people through pageant, drama, and humor.”—Heather Shaw Foreword

“Fairbanks was born in 1883, and to coincide with his 125th birthday, an ambitious book—Douglas Fairbanks, by Jeffrey Vance with Tony Maietta—has just been published. . . it tells you a lot about its hero, and it's generously illustrated—crucial for a performer whose impact was so overwhelmingly physical.”—Robert Gottlieb New York Review Of Books

“Given the phenomenal success of Johnny Depp's Pirates of the Caribbean franchise, a revival of appreciation for the granddaddy of all cinematic swashbucklers, Douglas Fairbanks, is long overdue. Perfect accompaniment for home entertainment viewing of the silent film star arrives in the form of film historian Jeffrey Vance's gorgeously laid out biography Douglas Fairbanks.”—Ben Terrall San Francisco Bay Guardian

“In Jeffrey Vance’s handsomely produced, long-gestated biography, Fairbanks’ enormous appeal to boys is frequently mentioned, though anyone witness to a room of film historians watching him will attest to a devotion transcending age and gender. Fairbanks is irresistible. . . . Douglas Fairbanks comes in the wake of Vance’s sumptuous volumes on Keaton, Lloyd and Chaplin . . . the stunningly produced photographs provide a visual link with his earlier books.”—Jay Weissberg Sight & Sound Magazine

"The heedless ambition of youth. The triumphs of maturity, redefining our ideas of fame, fortune and international celebrity. The sad aimlessness of the aging male, stripped of his powers over his formerly adoring audience. It is the archetypal Hollywood story, maybe the archetypal American story. And Jeffrey Vance tells it with verve and compassion and admirable compression in his handsomely illustrated biography of Douglas Fairbanks. It is a book that restores his subject to his rightful place as the American movies' founding Big Brother—shrewd, playful, flawed and endlessly fascinating."—Richard Schickel

"Over the years I have had an interest in Douglas Fairbanks' life and films before reading Jeffrey Vance's book. I was delighted to find that the research was admirable, the detail abundant, and the style devoid of pretense and heavy-handed scholarship. The book reads gracefully with a wonderful sense of 'and then what happened?' And a great deal does happen to the inimitable Doug along the way. His cinema world of high adventure, storybook romance, cloak and sword derring-do, and dazzling acrobatics against spectacular settings are all here in the text and in the abundance of extraordinary photos—many quite rare. A first-rate book."—Rudy Behlmer, film historian and author

"Douglas Fairbanks was one of the most important characters in film history, and this enthusiastic and well-researched book will tell you why."—Kevin Brownlow, filmmaker and film historian