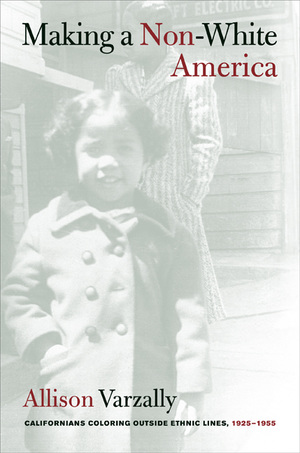 What happens in a society so diverse that no ethnic group can call itself the majority? Exploring a question that has profound relevance for the nation as a whole, this study looks closely at eclectic neighborhoods in California where multiple minorities constituted the majority during formative years of the twentieth century. In a lively account, woven throughout with vivid voices and experiences drawn from interviews, ethnic newspapers, and memoirs, Allison Varzally examines everyday interactions among the Asian, Mexican, African, Native, and Jewish Americans, and others who lived side by side. What she finds is that in shared city spaces across California, these diverse groups mixed and mingled as students, lovers, worshippers, workers, and family members and, along the way, expanded and reconfigured ethnic and racial categories in new directions.

“Valuable for scholars not only of the history of California and the West but of race and ethnicity in the twentieth century.”—Phoebe S. Kropp Journal Of American History

"The stories in Varzally's book are great, and they drive the analysis, which really does tell us a lot about how people form interracial relationships and how interethnic coalitions–indeed, how races–are formed in the everyday reality of people's experiences." –Paul Spickard, author of Almost All Aliens: Immigration, Race, and Colonialism in American History and Identity

"Most important among its contributions, this book points towards a broad reconceptualization of America's past that incorporates the various cultural communities of the United States, not as subordinate actors in an Anglo-centric narrative, but as equal participants in our nation's history." –Mark Wild, author of Street Meeting: Multiethnic Neighborhoods in Early Twentieth Century Los Angeles

1. California Crossroads
2. Young Travelers
3. Guess Who's Joining Us for Dinner?
4. Banding Together in Crisis
5. Minority Brothers in Arms
6. Panethnic Politics Arising from the Everyday