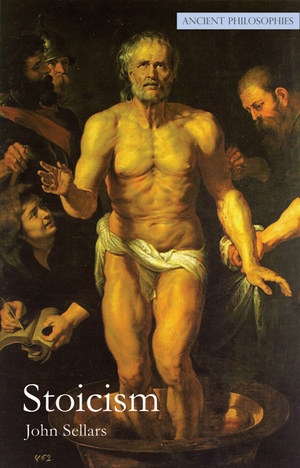 One of the most popular of the Hellenistic schools of philosophy in antiquity, Stoicism flourished for some five hundred years and has remained a constant presence throughout the history of Western philosophy. Its doctrines appealed to people from all strata of ancient society-from the slave Epictetus to the emperor Marcus Aurelius. This book provides a lucid, comprehensive introduction to this great philosophical school. It gives an overview of the history of the school, covers its philosophy as a system, and explores the three main branches of Stoic theory. John Sellars includes historical information on the life and works of the ancient Stoic philosophers and summaries, analyses, and appraisals of their principal doctrines in logic, physics, and ethics. He also includes a fascinating account of the Stoic legacy from later antiquity to the present. The volume includes a glossary and chronology, which, together with its accessible yet authoritative approach, makes it the ideal choice for students, scholars, and general readers interested in what Stoicism has meant, both philosophically and historically, for western civilization.

John Sellars is Lecturer in Philosophy at Royal Holloway, University of London.

“If readers are interested in Stoicism and want a solid, thoughtful introduction, then this is the book to read.”—Dialogue

“A lucid overview of the Stoics’ philosophical system, one that is well grounded both in the ancient texts and in this recent scholarship. . . . the best introduction to the subject.”—The Philosophers’ Magazine

"Stoicism needs a new work of this kind. Sellars not only takes good account of the last thirty years of research, he also has much of his own to contribute. I particularly applaud his focus on Epictetus and on Stoicism as an art of life. "—A.A. Long, author of Stoic Studies

1. Introduction
What is Stoicism?
The Early Stoics
The Middle Stoa
Late Stoic Authors
Other Sources
Decline and Loss of Texts

5. Stoic Ethics
Self-Preservation and the Origin of Values
Real Goods and ‘Indifferents’
The Emotions
Appropriate Actions
Virtue and Happiness
Living According to Nature
The Political Dimension
Summary

6. The Stoic Legacy
Late Antiquity and the Middle Ages
The Renaissance and Early Modern Philosophy
The Nineteenth and Twentieth Centuries
Summary