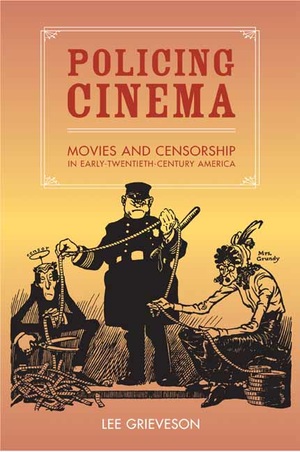 White slave films, dramas documenting sex scandals, filmed prize fights featuring the controversial African-American boxer Jack Johnson, D.W. Griffith’s The Birth of a Nation—all became objects of public concern after 1906, when the proliferation of nickelodeons brought moving pictures to a broad mass public. Lee Grieveson draws on extensive original research to examine the controversies over these films and over cinema more generally. He situates these contestations in the context of regulatory concerns about populations and governance in an early-twentieth-century America grappling with the powerful forces of modernity, in particular, immigration, class formation and conflict, and changing gender roles.

Tracing the discourses and practices of cultural and political elites and the responses of the nascent film industry, Grieveson reveals how these interactions had profound effects on the shaping of film content, form, and, more fundamentally, the proposed social function of cinema: how cinema should function in society, the uses to which it might be put, and thus what it could or would be. Policing Cinema develops new perspectives for the understanding of censorship and regulation and the complex relations between governance and culture. In this work, Grieveson offers a compelling analysis of the forces that shaped American cinema and its role in society.

Lee Grieveson is a Lecturer in the Film Studies Program in the School of Humanities, King's College, University of London, and a recipient of the prestigious Katherine Singer Kovacs Essay Award from the Society for Cinema and Media Studies.

“Policing Cinema is a substantial and worthwhile addition. . . with a truly splendid set of fascinating endnotes.”—T. Lindvall Choice

"This book restores my interest in the study of early cinema because it breaks important new ground and provides fresh and compelling perspectives. Grieveson demonstrates his mastery of this material in a way that is almost unprecedented and completely exemplary."—Charles Musser, author of The Emergence of Cinema: The American Screen to 1907 (History of American Cinema, Vol. 1)

"Policing Cinema is an outstanding piece of scholarship, easily the best book on early motion picture regulation and one whose argument about evolving definitions of cinema in the years leading up to the first World War will have a profound impact on conceptions of Hollywood 'classicism.'"—Shelley Stamp, author of Movie-Struck Girls: Women and Motion Picture Culture After the Nickelodeon