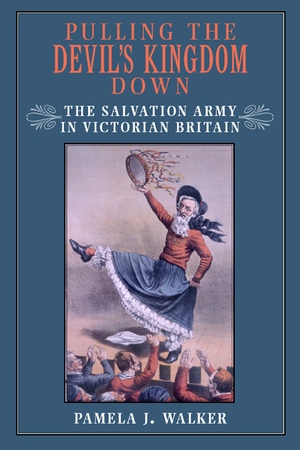 Pulling the Devil's Kingdom Down The Salvation Army in Victorian Britain

Those people in uniforms who ring bells and raise money for the poor during the holiday season belong to a religious movement that in 1865 combined early feminism, street preaching, holiness theology, and intentionally outrageous singing into what soon became the Salvation Army. In Pulling the Devil's Kingdom Down, Pamela Walker emphasizes how thoroughly the Army entered into nineteenth-century urban life. She follows the movement from its Methodist roots and East London origins through its struggles with the established denominations of England, problems with the law and the media, and public manifestations that included street brawls with working-class toughs.

The Salvation Army was a neighborhood religion, with a "battle plan" especially suited to urban working-class geography and cultural life. The ability to use popular leisure activities as inspiration was a major factor in the Army's success, since pubs, music halls, sports, and betting were regarded as its principal rivals. Salvationist women claimed the "right to preach" and enjoyed spiritual authority and public visibility more extensively than in virtually any other religious or secular organization. Opposition to the new movement was equally energetic and took many forms, but even as contemporary music hall performers ridiculed the "Hallelujah Lasses," the Salvation Army was spreading across Great Britain and the Continent, and on to North America. The Army offered a distinctive response to the dilemmas facing Victorian Christians, in particular the relationship between what Salvationists believed and the work they did. Walker fills in the social, cultural, and religious contexts that make that relationship come to life.

"Pamela Walker's treatment of the Salvation Army restores religious and social complexity to a group too easily misunderstood in the twenty-first century. Drawing us into a vivid, vibrant world of Victorian experience, Walker proves that the significance of the movement extended far beyond the demonstrations that became a familiar part of London street life."—Deborah Valenze, author of The First Industrial Woman

"A major contribution to our understanding of Victorian society, [this book] will undoubtedly become the key work on the origins of the Salvation Army, a major reference not just among historians of religion, but also among urban historians, gender historians, and historians of popular culture. . . . Perhaps the outstanding feature of the book is the author's ability to interweave a highly nuanced account of the development and theological orientation of the Salvation Army, and a fresh appraisal of its central figures, with a broader understanding of Victorian society, culture, and politics."—Andrew Davies, author of Leisure, Gender, and Poverty

"Deeply researched and vividly written, this book offers an innovative and consistently thought-provoking interpretation of the Salvation Army's origins and early history. Three aspects of the book are especially interesting. First, the discussion of conversion, including its physical manifestations, is powerful and convincing. Second, the theme of gender runs through the book. As well as presenting a striking portrait of the Hallelujah Lasses, Walker shows how the Salvationists challenged conventional notions both of femininity and of masculinity. Third, her discussion of Salvationist propaganda and its ambivalent relation to the urban working class milieu is consistently illuminating. She shows how the Army drew on certain aspects of popular culture in order to subvert other aspects."—Hugh McLeod, author of Secularisation in Western Europe 1848-1914

List of Illustrations
Acknowledgments
Introduction
1. The Roots of the Salvation Army: The Booths, Methodism, and Female Ministry
2. Creating the Salvation Army
3. Conversion: Theology and Narratives
4. Saving Souls: Salvationists at Work
5. Authority and Transgression: The Lives of Maud Charlesworth, Effie Anthon, and Rebecca Jarrett
6. Robbing the Devil of His Choice Tunes: Converting the Culture of Working-Class Neighborhoods
7. Disorderly Champions of Order: Opposition to the Salvation Army
Postscript : The Legacy of the Salvation Army
Notes
Bibliography
Index