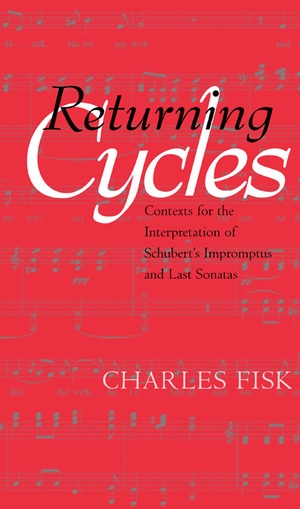 This compelling investigation of the later music of Franz Schubert explores the rich terrain of Schubert's impromptus and last piano sonatas. Drawing on the relationships between these pieces and Schubert's Winterreise song cycle, his earlier "Der Wanderer," the closely related "Unfinished" Symphony, and his story of exile and homecoming, "My Dream," Charles Fisk explains how Schubert's view of his own life may well have shaped his music in the years shortly before his death.

Fisk's intimate portrayal of Schubert is based on evidence from the composer's own hand, both verbal (song texts and his written words) and musical (vocal and instrumental). Noting extraordinary aspects of tonality, structure, and gestural content, Fisk argues that through his music Schubert sought to alleviate his apparent sense of exile and his anticipation of early death. Fisk supports this view through close analyses of the cyclic connections within and between the works he explores, finding in them complex musical narratives that attempt to come to terms with mortality, alienation, hope, and desire.

Fisk's knowledge of Schubert's life and music, together with his astute and imaginative attention to musical detail, helps him achieve one of the most difficult goals in music criticism: to capture and verbalize the human content of instrumental music.

Charles Fisk is Phyllis H. Carey Professor in the Department of Music at Wellesley College.

"A stunning work of contextual criticism...This is an exceptionally significant book that both sheds new light on a major repertory and brings to a new level the recent transformation within the discipline of musicology. I anticipate that it will have a stimulating and healing influence on music studies."—Susan McClary, author of Conventional Wisdom

"Fisk makes compelling use of his talents as both performer and critic-analyst of the music that is closest to him. His book will immediately become one of the most significant publications on Schubert of the past few decades. I can think of no other work that treats this repertory with such insight and sensitivity."—Walter Frisch, editor of Schubert: Critical and Analytical Studies

Acknowledgments
Prologue: Schubert after Winterreise
1. Resonant Beginnings
2. Fields of Resonance
3. The Wanderer’s Tracks
4. Retelling the “Unfinished”
5. Expanding the Scope of Schubertian Tonality: The Opus 90 Impromptus as the Stations of a Tonal Quest 6. Displacing the Sonata: The Opus 142 Impromptus
7. Beethoven in the Image of Schubert:
The Sonata in C Minor, D. 958
8. Recovering a Song of Origin:
The Sonata in A Major, D. 959
9. Schubert’s Last “Wanderer”:
The Sonata in B{fl} Major, D. 960
Epilogue: Telling, Retelling, and Untelling Schubert
Afterword
Notes
Index